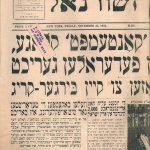 There is no dearth of reading material for the Jewish community, newspapers and magazines are readily available and here is my take on them. I am sure I left some out, but these are the one’s I have looked at or read on a regular basis. Do you have anything else to add?

The Yated is the yeshvish paper of choice it has the readers write section, in which Lakewood kollel wives complain about women wearing crocs to shul, the visiting day crisis (see explanation below) and how to solve the shidduch crisis by telling girls to stay in the freezer (Lakewood yeshiva policy for not letting guys date after they come home from Israel) just like guys.

The only other interesting feature in the Yated for someone who doesn’t want to read cut and pasted week old AP and Reuters articles is the Chinuch Round table – someone asks a question (sometimes juicy) and a bunch of Rabbis from different institutions answer it. Every Rabbi says the same exact thing and there is no diversity within the group. One week there was a question concerning this family who invites over yeshiva rebels to get them back on track but they have two teenage girls and they scared of the influence – it had the most sexual undertones I have ever seen in a yeshivish publication – but most of the time it has to do with whether or not girls should be taught aleph bais, because that may lead them to want to learn gemara.

Then you have the Jewish Week, which is trying to be a Jewish version of the New York times, well thought out articles by academics bashing anything religious or right wing, at least one article per issue about a crisis in Africa which has no Jewish appeal and items that are constantly telling us how philanthropic liberal Jews are even though they rarely give to Jewish organizations.

The Hamodia is actually a real paper, of course its all right wing, doesn’t have pictures of women and is full of ads for kishke and kugel makers – but its a daily paper and people love it, it has absolutely nothing of interest to me, but for folks who can’t tune in to Fox news daily because their TV is behind the mirror in their bedroom it works.

The Jewish Press is famous for being the only paper in which their is an ongoing halachic debate whether you can bring it in to the bathroom or take it out of the bathroom. It also has several pseudonyms, The Jewish Mess, The Jewish Prust, etc…and for one reason or another – probably because they have the most diverse roster of writers, is hated by many in the more black hat community.

The Jewish Press has articles from Lubavitchers, secular Jews and frummies and modern orthodox. It happens to be that the Jewish Press has some controversial stuff that is not appropriate for little Ruchie fresh out of seminary. The Chronicles of Crisis in which many of the issues dealt with are swept under the rug on a regular basis is part of the Family Matters section which could be pulled out of the paper for censoring.

The Jewish Press also has something that I am surprised more papers don’t have, and that is articles dealing with shidduchim and the so called shidduch crisis. You would think, if there was really a shidduch crisis facing the frum community, more Jewish publications would devote more space to it. Esther Jungreis and Shmuely Boteach love writing about it and at the back of the Press they have the shidduch page which has a male/female response to questions about shomer negiah, saying no after the first date and telling the guy you can’t send him your picture because you haven’t photo shopped it enough yet.

There are loads of local Jewish weeklies and I don’t know of them all, but maybe you can enlighten me with what they spew.

The Five Towns Jewish Times it seems is devoted to advertising, its kind of like one of those countless free zines with ads for tichel washing – but in a more large print format. Every other advertisement is for an overpriced yeshiva dinner or a raffle in which you can win a dream kitchen or fully stocked beis medrish. I was published in the paper, but I still like the Jewish Star better.

The Jewish Star is the other five towns Jewish paper, reading it makes you draw the comparison between it and the FTJT in that the Jewish Star is way more mature and an actual newspaper, whereas the FTJT is just an advertisement ladden NY Post style paper. Not that either of them are that interesting, but if you want news, that’s what its about.

My favorite ads in Jewish newspapers are the ones for New Yeshivas opening up – seems that different programs for off the derech kids open every day. I love how they try to be all politically correct with phrases like “do you want your child to receive the attention they deserve?” Which really means that they have drug tests and wont let the kids out at night.

In Dallas they had the Texas Jewish Post which was really an overpriced undervalued edition of the Jewish Week, it was tiny, colorful and had nothing of interest to anyone besides for Texas Jewish Community Center directors – so they could know who to hit up for money.

Mishpahcha magazine is the only Charedi magazine, and its actually pretty good. I really like their articles about great Rabbis that passed away or on their yirtzeits. The magazine caters to women it seems, and once in a while they go a little risque and talk about the shidduch crisis or judging within the frum community – but most of the time it is Rebbe stories and how to make sushi for your next vort, or how to wash and set your sheitle.

I bought Heeb magazine once and it was great, it was before I started writing and entered the Jewish literati world. The Beastie Boys were on the cover, they had an ad for kosher butt lube and a picture of a ketuba for same sex couples, but the next time I saw the magazine it had degenerated into an elitist hipster rag of kitschy Jewish things like glow in the dark dreidles and too many bagel and Jewish mother guilt articles.

Lifestyles Magazine has got to be one of the most ridiculous magazines I have ever seen. Basically one thick magazine full of maserati, rolex and personal jet ads with picture after picture of cocktail party attendees with lifted faces smiling because they just gave away a million dollars to some Jewish environmental fund. Its really pathetic, and its like $8 an issue.

These are the low budget versions of Heeb for college students who use the term Jew-ish. I enjoy all three of them, but am waiting for my subscriptions so I can find out more.

Periodicals I don’t read and therefore can’t throw forth my two cents:

Moment and The Forward – two world class publications which I would love to write for someday. Other than that I know nothing.

The visiting day crisis: The Readers Write section of the Yated erupted with chaos last year when one reader brought up the visiting day crisis, how something deteriorated into a crisis so fast boggled my mind but based on the letters it seems that anything that bothers anyone in Lakewood or Boro Park becomes a crisis.

With that said the so called visiting day crisis revolved around the fact that parents couldn’t afford the costs of visiting day. You have to give tips, drive up and then take the kids to Woodbourne to fatten them up and buy them nosh. I recall visiting day as going for a hike with my dad. But I guess parents have lost the concept of not spoiling their children and turned it into a crisis instead.

I hope to continue this with a satirical critique of Jewish news websites for there are many…and possibly a more in depth look at the types of advertisements in Jewish news papers.

← RE: You may hate Obama – but this racism is uncalled for
Charedi shabbos protest thoughts →

68 comments for “Guide to Jewish Newspapers”