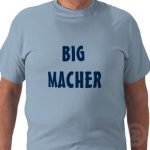 One year he decided to buy candy canes, but this wasn’t your run of the mill after Christmas sale at Rite Aid, this was a truckload of candy canes, he got a good deal. He always got good deals, this was the head macher/hocker of the yeshiva and he just bought himself a lifetime supply of candy canes and they were kosher too.

They stored the candy canes on the second floor right near my room and at some point, probably after he realized that he got such a good deal because no one else wanted them, we yeshiva guys started to eat candy canes. I feel that a more frum yeshiva this would have never happened purely based on the fact that candy canes go together was Christmas or Crotzmas as they say in the old country and in most yeshiva settings this would be purely assur, but Rochester is a bit more open minded as they say and we chowed down on candy canes.

I don’t think he was able to sell them like he intended to, I think he wanted to be the candy cane supplier of amazing savings or family dollar, but instead he supplies the afternoon seder with their snacks.

Another time he decided to buy canteens, I have no idea where he got these bright ideas from or who really needed thousands of canteens, but these random 24 foot trucks would show up and dump loads of useless products on our lawn, to be sold by some bored high school guy at flea markets.

I think he hit it big when he finally figured to get into something lucrative like baseball cards, I think he may even still be in that business. He wasn’t a dumbass, he was actually a really smart dude – one of the reasons that he was dorm counselor one year, or maybe just because everything he took away probably went up on Ebay, he was an Ebay guru after all.

Did your yeshiva have any of these scheming machers who invest in useless truckloads of useless products?

← You may hate Obama, but this racism is uncalled for
Frum Satire makes a shidduch – the video proof →

50 comments for “Did your yeshiva have a big macher?”