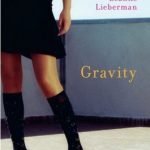 Gravity by Leanne Lieberman is a fictional story about a young orthodox girl struggling with her sexuality, it’s a simple take on the whole issue of being orthodox and gay, and ever since my friend came out of the closet to me a couple months back I have been terribly interested and saddened by what the many in the closet religious gays and lesbians must go through to maintain their communal and family relationships.

Gravity is a light and funny read, it isn’t gut wrenching at all, its not such a sob story as it is the story of a religious family in Toronto with issues like anyone else. The family has two daughters, Ellie is attracted to girls and cant get over the idea of loving a God who calls her an abomination and her sister Neshama is fed up with her Baal Teshuva parents that are so strict on her that she just wants to liver a normal life without the burdens of orthodoxy, so you have the lesbian and the girl who is going off the derech – which creates something interesting because Ellie loves Hashem and that’s why its so interesting, because she is trying to figure out if there is way that God can still love her even though he made her to like girls.

Then throw in too wacky Baal Teshuva Parents who decide to start having large brainwashing intensive shabbos meals which their daughters hate and in the process get kicked out of their shul because the mom sings too loudly one shabbos makes for quite an interesting story line.

Unlike many other books portraying orthodoxy, I didn’t find Gravity to be insensitive towards orthodoxy. I actually found it to have a pretty positive message overall, I thought the book could have been a bit longer – but it definitely left me wanting more. The book is not too graphic or sexual in nature, there is a lot of innuendo and some light sexual scenes.

Overall a good quick and easy read, and a very educational and interesting look into the orthodox Jewish world and specifically the world of a teenager struggling with her sexuality in a world where sexuality is not talked about until your kallah classes.

H/T to Matthue for informing me about this book…

← What gets people to go out on dates?
Does God ever really hook you up? →