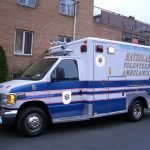 Hatzolah makes many people cringe, I myself used to cringe when I was stuck in traffic on Friday afternoon and suddenly a big fat Chassidish hocker in a suburban with lights flashing and peyos thrashing about flying down the shoulder of route 17 on the way to a fictional accident. How do I know the accident was fictional? Porbably based on the countless times I have seen cops run red lights and do illegal things because the men in blue are above the law, or maybe because I have seen Hatzolah people do it as well, I may be wrong or I may be right.

Whatever the case may be, people love to hate on Hatzolah guys, or girls (can girls work for Hatzolah? Never even thought of that) Maybe more people would call Hatzolah if some hot Bais Yaakov girls were giving you CPR and pumping your chest. We love to hate because its so easy to hate hockers. Those rude guys who love to eat at greasy burger joints and never clean up their trays (wait that’s every frummy – my bad) so people love to hate and point fingers, but in reality we really don’t understand.

You see I never realized how kick ass Hatzolah really is, I always thought it was a bunch of nursing administrator types who could afford the gas it takes to fill up a suburban and were kind of off the derech in high school and wanted to give something back to the community and disturb people during davening because they love turning their walky talkies on high volume. But when you look at the bigger picture none of this makes a difference, Hatzolah provides an amazing service and its free, well its funded by tzedaka, but it does two things, it gives you a name brand choice at the oregano encrusted tzedaka box depot at every pizza store – because who really wants to give to some family who claims they cant find a job in Israel but could afford the plain ticket to America to come collecting, when you could give it to the proud white ambulance shaped tzedaka box. The other thing they provide is free ambulance and paramedic service, do you know how much it costs to ride in an ambulance? Its ridiculous and sometimes they force you even if you don’t want to go.

So it really makes no difference that someone wants to join hatzolah because its cool, hatzolah guys are kind of like hipsters because people love to hate them but really don’t have a good reason. Yes the loud mincha time walkie-talkie is annoying and their little gatherings on ocean parkway every time someone gets into an accident can do more harm than good, but in the end in order to get people to give up their free time to provide a free service they have to make the job somewhat attractive, so you get your uniform, free food at select Boro Park eateries and the knowledge that you can get pulled over and the cop probably wont give you a ticket because your one of them, sort of.

57 comments for “Everyone loves to hate Hatzolah guys”