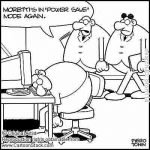 I was woken up multiple ways during yeshiva, hair pulling was common (though I don’t know how that was legal because you aren’t allowed to touch your hair while davening) ear pulling was common, as well as the traditional ear flick, tzitzis in the ear, feet kicking and slap on the back of the head. When the Rabbis weren’t yelling at me for putting my head down during shachris, it was one of the self appointed mussar givers in the beis medrish. I figured that after I left high school this would end, but it only morphed into a different animal.

Enter the self appointed shul mussar guy, these are the guys who take it on themselves to make you feel as uncomfortable and evil as possible whenever you aren’t maintaining the shul status quo. These are the people who yell at you when you are sitting for pesicha, or when you need to go to the bathroom in the middle of the rabbis speech. They are also the “shut up or die” people who cant stand any talking in shul, no matter if your kid is dying of hypothermia from the industrial AC system.

My father sometimes acts as the self appointed mussar giver. He is constantly seen quieting people down (even though he himself talks – being a hypocrite is part of the job description) telling people its assur to talk during maariv and yelling at anyone sitting during kadesh, he was also big into the bimah hocking which kind of flows with the self appointed mussar giver.

I also feel like these self appointed mussar folks are the ones who try and get Kiddush clubs banned. Prevent kids from drinking on holidays and send secret notes to women dressed untzniusly telling them that they are going to hell. These people also back up the Rabbi in any situation and write in to the Yated readers write section to vent about women wearing crocks to shul and the visiting day crisis.

21 comments for “Are you a self appointed mussar giver?”