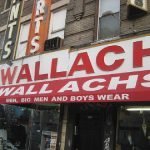 Dad: You can’t wear that

Me: Why not? What’s the problem?

Dad: Don’t argue with me, that’s just not how its done over there. Just put on some pants.

Dad: If you want to go you have to wear pants, enough!

This was how the conversation went every time, its not like we were going to some fancy banquet and I wasn’t dressed appropriately. We were going shopping in Boro Park for God sake, I just had no idea why I had to wear pants. If only I would have known what I know now, I would have had some great arguments.

For instance, my father and I would always wear jeans and baseball hats, according to most folks Jeans are much more goyishe then a pair of shorts, but this was my fathers vision of what other people wore. Such a conformist and all we were doing was going to three stores. G and Sons, Wallachs and then some pizza.

My father is the type of guy who loves a good deal, when he finds something he brags about it for years, and these deals are usually found in obscure stores in Borough Park. He recently found wild salmon for cheaper then regular farm salmon sells for in Far Rockaway. I have heard this fact nearly 80 times, every person he meets, he feels the need to tell someone.

Same with Wallachs on 13th avenue, throughout my youth I spent many hours there, trying on shabbos shirts and pants (only FFB’s call it that) because Wallachs was apparently the cheapest dress clothes store in the world. This was before I discovered Marshals, TJ Maxx and Burlington Coat Factory – I then realized that Wallachs was pretty damn expensive and mildly annoying because navigating the triple parked cars on 13th avenue is a nightmare.

My father told me that when he was a kid his father wouldn’t let them go to Wallachs because it was open on shabbos, and so they went to Beckers that was closed on shabbos but more expensive. I guess it goes to show you that stores open on shabbos last a longer time because Beckers is not around anymore.

We also used to go to G and Sons all the time, when I moved out of my house and needed pots and cutlery, we went to G and Sons and I realized that “cleansing” your stuff in a kelim mikvah is one of the most disgusting things you have to do in Judaism. My father dropped a spoon to the bottom and got soaked trying to get off the floor which was littered with other dropped silverware, waterlogged beard hairs and paskez candy wrappers.

G and sons was like the Wal Mart of Boro Park, they had all of the cheapest most non-durable products. Heimishe (term used by frum people to describe low quality) would be an understatement, but as modern orthodox kids who never saw the frum candies like bloomys and paskez, we were in heaven. I had an addiction to sour sticks, fizzer pops and bubble blast gum at the time, to my fathers chagrin.

No trip to Boro Park was complete without some cheap pizza. Back in the day, every pizza store in Boro Park charged a dollar for a slice – this was long before I thought I would see $3 a slice. In a way pizza is like gasoline, it keeps going up in price yet no one curbs their pizza addiction – unfortunately pizza cannot be replaced by some sort of alternative pizza.

Boro Park has changed a lot for me, the only reason I step foot in the place is to go to my bank, car mechanic or for lunch at subsational yesterday. People keep telling me to check out one of the Thursday night cholent spots, but for that I need a tour guide, anyone want to take me to Hadar Geula and be by guide?