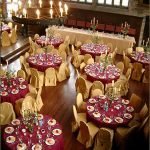 The NAAJP (national association for the advancement of Jewish People) announced a lawsuit against several orthodox wedding halls around the New York area today, citing that the segregation of secular relatives and guests at ultra orthodox weddings at what is known as the non-frummy tables.

Orthodox weddings typically have one or two tables reserved for their non-observant relatives or co-workers, these tables tend to be put off to the side since many of the women are scantily clad and showing their elbows, the men typically wear white pointed yarmulkes to help waiters discriminate against the people sitting on these tables to try and serve them faster so they should take a hint and just leave.

“Separate but equal” does not apply in these situations according to Gitty McKinley president of the NAAJP. She went on to say that these non-frummy tables were similar in vain to schnorrer tables, but always had inadequate amounts of food, no views of the dance floor and lacked the free prayer books or yarmulkes commonly left on the tables at orthodox Jewish weddings.

According to many folks, the economy has forced wedding planners to scale back on expenses and the first thing to go were the non-frummy tables. “We just didn’t feel it necessary to give folks yarmulkes and benchers if they are never going to use them” said Yankel “Toofrumforyou” Finelburgerstien. Yankel went on to say that many leading Rabbis have proposed a ban on secular people from eating at weddings because they would go and eat at Sizzler afterwards anyway.

Although an all out ban on non-shomer shabbos relatives and guests at orthodox weddings has been raised, many Rabbonim feel that this would greatly reduce the amount of gifts recieved by struggling young couples – since secular Jews are most probably wealthy and have traditional Jewish jobs like doctors and lawyers, while their orthodox brethren in the real estate and insurance fraud industries are hurting with the housing crisis.

Other complaints from secular Jews being seated at the non-frummy tables have been noted. Lack of a pickle tray is most common while no choice between chicken and beef has also been spotted. Many complaints about schnorrers being treated better than the non-orthodox relatives have also been recorded.