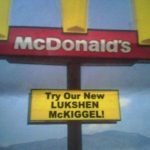 I had an epiphany tonight while sitting in Burgers Bar of the five towns. , if people and shuls could be hashkafically labeled, why can’t restaurants?

Lubavitch: In order to be considered such, you need a bit more than the token Rebbe picture. I can always tell a Lubavitch restaurant when they have lubavitch siddurim and random benchers with those songs like “ little bird” in the back of them. Yamrulkes with tzivos Hashem patches should be scattered about and ideally the Rebbe picture should really have a framed dollar somewhere in it. I am sure in Crown Heights they have meshichist and non-meshichist restaurants – but if any of you folks ever get the chance, do yourself a favor and go to Deli Kasbah on the upper west side for the real “rebbe is moshiach eating experience” everything is Rebbe related, right down to the message from the Rebbe on the menus, and if that’s not enough they have rolling videos of fabrengins instead of sports on the screens.

Modern Orthodox: I thought of this idea while sitting in Burgers Bar tonight, I thought of it mainly because Burgers Bar in the Five Towns is too narrow of a restaurant to be considered frum, narrow walkways make for hairy situations when your trying to avoid those “let me squeeze behind you without rubbing your butt” situations, and they force men and women to come in close contact with each other, but I really thought of the post while listening to the music. You see, frummy restaurants would never play goyishe music, let alone top 40 pritzusdike stuff. Modern orthodox restaurants also have non-Jewish periodicals and may even have workers dressed untzniusly.

Modern orthodox restaurants will also sometimes have talk radio on b esides for music, you can always find stray copies of the NY Post lying around and nannies from the West Indies will always be wheeling a bunch of rich modern orthodox kids into the place and taking orders. Modern orthodox pizza stores are all run by Sephardim.

Chassidish: Have any of you ever been in a restaurant with a mechitza? Or maybe a restaurant in which, women are clearly unwelcome and don’t bother venturing inside? In Williamsburg you have Greens – which has two entrances and a very high wall that isn’t just randomly placed, its like a modern orthodox machmir shul mechitza, but still, its in a restaurant. I have always wondered if the rules are similar to the bathroom with regards to allowing your kids to eat on the other side of the wall. One of my favorite restaurants in the whole city, Gottleibs, a deli in Williamsburg is clearly made for men, although women do enter, if you ask for a salad they look at you like your nuts – I heard a rant against vegetables unless they are in cholent once. Real chassidish restaurants don’t have menus, because choice is assur.

Yeshivish: The first thing you will notice is pre-pubescent choir music with Shweky in the backround, yeshivish restaurants always have yeshivish music. They also must have a poorly placed stroller to block the washing station which is located down some dank narrow hallway stuck between the bathroom and the kitchen. There are always a bunch of kids who are dressed alike and give you the borough park stare. Yeshivish restaurants are also trying to be cool so you will notice that they love fish tanks that have never been cleaned. There has to be stacks and stacks of those free magazines that only have ads for sheitles and furniture in them, with games that try to get you to find a random spoon in order to win 20 bucks. Yeshivish restaurants are the only ones who changed the name French Fries to Freedom Fries.

Yeshiva Guy: There is a whole category of restaurants that caters to the yeshiva guy that wants to die of a heart attack at a young age (make sure your kollel gives you life insurance). Subsational, Burgers Bar, Carlos and Gabbys, Shawarma joints, places that serve weekday cholent and any place that has “schnitzel” in its name. These restaurants are all brightly lit, and try to hire off the derech guys as their mashgiach tamidis, or hot underage girls to bring the yeshiva guys in the door – Carlos and Gabbys in Brooklyn has taken the Purple Pear route by hiring two hot semi-rebellious girls to take orders and turn the nightly yeshiva guy crowd on. These restaurants must have stale bread in a bag inside a whicker basket by the washing station, they usually don’t have any music playing and are almost always located in places where it is hard to park.

← Its official: Strawberries are kosher
You’ve been Aished!!! →

25 comments for “Restaurants can have hashkafic levels too”