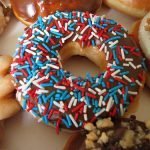 It wasn’t just an ordinary jelly donut with powder on top, it was a wonderful thing this donut, a taste of freedom, a taste of normalcy – mostly because it wasn’t allowed. It wasn’t allowed for political reasons, for philosophical debates as old as time itself prevented us from eating these luxuries jelly donuts.

I would bundle up, 20 below zero winds made it even better. I would ride my bike out to Brighton Donuts in the sub zero winter evenings. I would look both ways as if I were a child crossing the street, but this was merely to check that no one from my yeshiva was watching. No rabbi was staked out in his 87 caprice classic station wagon waiting to catch me eating treife, it wasn’t even treife, they said it was, but it really wasn’t – it was mostly political. A low mechitza combined with a white knitted yarmulke works wonders for modern orthodox shuls trying to get along with a yeshiva.

I liked the prospect of being normal, getting to walk into a donut shop just like everyone else. To be frank I was riding my bike in temperatures that news forecasts always warned people to stay inside. Those news reports about some old lady freezing to death while getting her mail always struck a cord with me, they didn’t stop me, they merely struck a cord. Obviously not a deep enough cord because here I was wearing ski goggles and three pairs of pants while riding my bike on snow just to get some donuts.

It really wasn’t the donuts, it was merely the fact I had a destination of sorts, its nice to have a destination, although I only spent about 2 minutes at longest in the donut shop, I would be greeted by cops and old men who stressed shock that anyone would ride their bike in whether such as this. It was an ego boost, and then I would order a strawberry filled donut and a muffin of sorts. I would never bring them back to yeshiva, I would merely ride around the beautiful side streets of Brighton.

I would then stop on this one side street that had an old crumbling staircase and unravel my cold moist donuts. It was an interesting affair, I never went with anyone, I was always a loner, but looking back I had all these special things I did by myself. I would eat my donuts and sit on the snowy steps of this staircase that no one used and I would look at the nice suburban homes and imagine what it was like to live in a house – I had grown up in an apartment and had no idea what it was like.

← Anti-Chabad comedy video
Give me your feedback: comments and complaints →