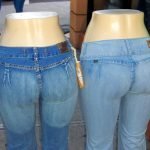 “Tiberias, Israel – A rabbi in the Israeli city of Tiberias has called for a boycott of stores that display mannequins in bathing suits, saying they “elicit sorrow” and damage the souls of passers-by

Rabbi Rafael Cohen, chief of the northern city’s kosher division, said the stores would face the wrath of the religious community and lose their kosher certification if they failed to comply.” Read the article on Vos Iz Neias.

I was wondering when this would happen, seriously, naked mannequins especially the blank ones (we don’t want to send false messages to the youth you know) are a terrible thing. Its like legal pornography, only its not.

I always figured it was a given that Mannequins were banned, if women can’t even drive – how can their plastic counterparts just stand in windows for all to see.

According to the Rabbi these mannequinns in bathing suits are damaging our souls. They probably are, but its because frum men will expect women to be as skinny as mannequins and this is logistically impossible because frum people eat crap and only exercise once a year on Lag Baomer.

Now I wonder when they are going to ban those styrafoam sheitle heads?

Charedim ban the story of Esther

87 comments for “Mannequins are banned in Israel”