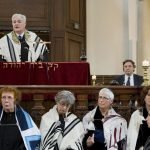 I rarely get to hear a rabbi that gives an interesting sermon, but at least you know that no matter what happens you are kind of locked into shul for musaf and all that prepubescent singing afterwards so your stuck either way. I am always excited when the rabbi skips the pre-musaf speech, as I am sure many of you agree – its kind of like the shul version of having a cop put on his lights behind you and passing you right by – its God saying “you got off this time but…” and its a real heavenly feeling when that happens – I just get so happy when I begin to sit down for the speech and the chazzan strikes up musaf.

On the flip side this sometimes happens and then when you think shul is over and suddenly instead of being serenaded to kiddush with anim zemiros the prayers are stopped and the rabbi si up there telling you that he is not going to take a long time. Time moves at a standstill and everyone in the shul is think WTFK where the F is kiddush? Well at least I think everyone is – but they are probably too nice to even acknowledge their feelings and not as cynical as me about food and waiting.

The other problem with after musaf speeches is that the president always gets up after shul as well and this is like having two speeches in a row. I never understood what exactly the point of a shul president announcing the times is. They never do a good job, sometimes interject something really corny and never have anything interesting to say. Shul presidents usually suck at public speaking, although I never really know what they do behind the scenes at board meetings.

I wish there was some sort of RCA or OU rule that mandated time limits and official locations during davening for rabbi sermons.