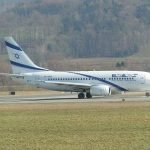 I would go on a gay flight just for the experience, its bound to beat the traditional 6am shachris in which your woken up because talesim are flying around and you can’t sleep through the tefillin boxes knocking from opening. Gay flights are bound to take the mile high club to a new level, because being gay in an airplane bathroom just doesn’t seem too fun.

Either way I can gauruntee you that some groups will boycott this newest marketing tactic, if they don’t want them flying on shabbos they sure as hell don’t want Elal to have same sex flights although I have mu suspicions that this could be good for frum men who wish to take all male flights to Israel.

I can imagine frum men hijaking these flights to the point that they become same sex straight flights, I can only imagine some gay dudes getting on a Charedi flight and thinking they got on the Bear Flight when they Requested the Femme Flight.

I am also sure that we are to see some good riots when this thing becomes more public because everyone loves to riot when things like this happen – because its an abomination right?

Several different sects of Jews have already formulated opinions on this issue, here is what they have to say:

Lubavitch: What an amazing opportunity to put tefilin on folks who may have a pintele yid. We already have a gay shliach on hand to work with incoming tourists.

Yeshivish: Assur – we are going to have a late night seder to daven so that Hashem will punish all sinners.

Charedim in Israel: We shall burn down our own neighborhoods in protest, we will boycott Elal.

Modern Orthodox: They must be very zionistic!

Feminists: Discriminating against lesbians is uncalled for.

Vos Iz Nieas commenters: (new category of Jew) Well I am sure the planes will crash, and Elal will go bankrupt and then we can have a mamish frum airplane company. Or – what a Chillul Hashem. Moshiach must be on his way. Maybe moshiach is gay?

Gay orthodox Jews: When will there be only Jewish gay flights?

← Tricky shidduch situation
Are folks who believe the Rebbe is the moshiach really Apikorsim? →

32 comments for “El-Al to have gay flights”