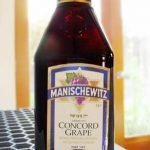 The only reason I have ever witnessed orthodox Jews drink Manischewitz, is because my yeshiva was located 60 miles from their winery and would get free wine in return for the slave labor offered them in the form of rabbinical students. I would watch as Manischewitz blackberry wine was poured out like molasses into the Kiddush cup and a few brave souls would try this strange concoction and make faces that told me that it was better suited as an ice cream topper than as Kiddush wine.

Fast forward 10 years and I am stuck with this feeling of disgust every time that I witness a Jewish video on You Tube with someone trying to make fun of the orthodox by drinking Manischewitz. Whether it was the infamous Jewish Lazy Sunday remake or the banned Miriam and Shoshana Yeshiva girls gone wild video, there seems to be this reoccurring theme of drunken Jews pounding Manischewitz and I’m sick of it.

It would be one thing if it were a bunch of secular Jews with wearing those free plastic white yarmulkes and having a Maxwell House inspired Pesach seder, but its not. In fact, if you were to get your entire Jewish education from You Tube you would probably think that all Jews ever drank was Manischewitz wine and on occasion borsht. In fact a friend of mine who sometimes works as a wine connoisseur at Jewish food events in his area, has a hard time convincing secular Jews that they are allowed to use wine other than  Manischewitz.

Besides for my yeshiva days in Rochester, New York – I have never once seen an orthodox person drink or buy Manischewitz wine, in fact you would be hard pressed to find it in a kosher wine store or wine store in a Jewish neighborhood. I just wish these Jewish videos would try and figure out orthodox culture and realize that we have our own shitty wines, like Baron Herzog white zinfandel or Bartenura’s Moscato Diasti which many unemployed sheitle machers from the shtetles or Boro Park and Monsey prefer.

The only Manischewitz product that orthodox Jews eat en masse is Tam Tams (specifically to scoop up herring sans utensils at kiddush across the globe) , even the matzo they make is mostly “not for passover use” which I wil rant about some other time.

← My kind of shiur
Some crazy links for you →