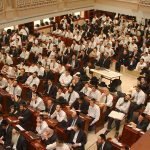 I immediately felt welcome at the shiur I went to tonight, and it just may have to do with all the bitul torah that was going on. I was munching on some freshly grilled burgers and chicken wings when it started, the first discussion/argument or hock of the night. The rabbi was doing one of those push away from the table sit down shuckels as he read from a mesilas yeshurim and out of nowhere everyone started picking apart the kollel system.

We were learning about how people should work and learn or just learn, it kind of sounded like the arguments that go on in the “readers write” section of the Yated (probably the only reason anyone would even read the Yated – like a Daas Torah kosher blog) about how its better to learn then work (although I have no idea how anyone would be able to pay for the learning if the Yated readers got their way) So this led to the classic argument against a kollel lifestyle. But it went beyond that of the classic shiur argument, along the lines of a full blown Vos Iz Neias affair at which point it became quite enjoyable.

Then the rabbi hushed everyone up and he went on with the table pushing shuckel, but it wasn’t over, side conversations over the validity of taking handouts and learning, but not really learning were discussed and I listened to the rabbi and the side conversations at one time.

Then we started learning something else about shabbos goys and what you could tell them to do and not to do. It was interesting to hear a bunch of Young married Brooklyn cynics screaming about the Marine Park electricity grid not being able to handle all the appliances and whether or not you could use shinuys to tell the shabbos guy what to do. For instance, if you asked him to turn on the light while you were facing the wall, would that be ok? I myself felt like I was at a Frum Satire sponsored event.

It was perfect for my ADD, I could listen on and then all of the sudden everyone would be throwing arguments back and forth and the half bitul torah half discussion would begin, it was totally tailored for me – kind of reminded me of the dumb shiur during high school actually. I am tempted to call it the Bullshit Shiur without the Bullshit, because I have always heard about how guys in big yeshivas are constantly schmoozing, but in this case it was kind of encouraged.

I was invited by a fan and there was barbecue these two factors should also be taken into consideration.

22 comments for “My kind of shiur”