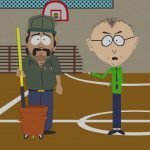 I was hanging out in the lobby of the Young Israel of Far Rockaway this past Friday night when I noticed a crowd of kids and teenaged boys hanging around the janitor and it got me thinking about the whole cool shul janitor concept and that there are always those kids who think they are extra cool because they get to hang around the janitor.

I think there is this fascination that comes with the non-Jews employed by Jewish organizations. You have the cooks, janitors and maintenance guys who are rarely Jewish. In my yeshiva we had a whole crew of non-Jewish employees, several black, some foreign and Sam the white middle America janitor – whom I could never figure out – mostly because I stayed away from these people.

I was never one to try and ingratiate myself to people to try and be cool. I did used to hang out with this one doorman in the building I grew up in, but there came a certain point when I realized that the doormen looked at all the tenants as rich snobs who didn’t appreciate a helping hand – we probably were – my family wouldn’t have been there had we not bought the apartment years ago, but still these people weren’t my friend, they were using my company to pass the time.

In yeshiva there were people that got close to the workers, they always ended up being those guys with the big key ring and all the knowledge about boiler room mechanics and what the cook or garbage man did before coming to yeshiva. Apparently our yeshiva cook had been trained in France and owned a restaurant; he also fought in Viet Nam and for some reason wound up cooking mac and cheese at a yeshiva.

I have been to countless shuls and seen the janitor with all the kids trying to talk to him phenomena. I think part of the reason this happens, is because these kids never get to come in such close contacts with non-Jews so often. I do find it funny because I can pretty much guarantee that many frum kids’ views of the non-Jewish world are shaped through the eyes of a janitor, not really the best influence if you ask me.

64 comments for “Why do kids think shul janitors are so cool?”