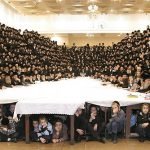 Tonight I did my first show exclusively for Chassidim and it went real bad. I was super pumped because it would give me a chance to finally make fun of Satmar folks to their faces and it flopped, I was kind of shocked that it did – and even though plenty of folks at the show said they liked it – judging by the lack of laughter in the audience – I could tell they weren’t too pleased.

It was quite pathetic really, the food was good and the location was pimping, but I felt super bad taking these peoples money for entertainment that they didn’t seem to enjoy. It is debatable if it is my worst show ever – but it definitely made me happy because my goal as a humorist, satirist and comedian is not really frum audiences, I would really like to crack into the liberal secular artsy Jew crowd.

I had to keep on explaining that I do clean Jewish humor and although some of you may not think of me as a clean comic I am predominantly clean – and I guess “cool” chassidim don’t want any of it. Kind of sucks because I totally thought I had a Chassidish following.

Hopefully while I am in New York (although I will travel anywhere) I can get some other shows going on, something on the Upper West Side is in the works, as well as a possible Lubavitch Lag Baomer event – if anyone would like to hire me out to rock their world – send me an email [email protected]

← What was your worst restaurant experience?
The weirdest gemara ever →

15 comments for “I guess Chassidim don’t like my humor”