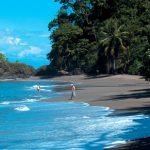 The bridge was too narrow for people to work in twos, therefore every time you came upon a group of people you had to go single file and make eye contact for too long to be comfortable. It was unnerving having to walk behind your partner and stare people in the eyes at such a close distance, especially in New York where people are used to being balled up in themselves and not used to coming out and talking to people. There was nothing else to do when the moment for the casually eye locking arrived but to say good shabbos, it was said many times that day, most of time to groups of young adults of the opposite sex with this hint of sexual tension. I am sure many for the boys hoped to catch one of the girls eyes and maybe, just maybe they would stop and chat – there was no room for any of that of course – and most people just trudged along and unhappy at their missed opportunities.

My brother and I walked across the bridge and after a while got bored with the downward glances of the young girls and guys trying to make their mark and get some. I always love when people exit their shells for a second and say good shabbos, but this was forced, this was instead of saying excuse me. This wasn’t a cheery friendly good shabbos, this was an awkward “what the hell else am I supposed to say when I try to plow you down with my lack of turning radius stroller” good shabbos. I did like all the sexual tension on the teenage girls side when they carefully said good shabbos, sometimes after passing us, it was all so new to me.

We got to the boardwalk and I immediately tried to find out if there was an eruv, even though pretty much everyone was carrying something no one actually knew if there was an eruv. Judging from the lack of any wires, I figured there wasn’t and no one really cared. It appeared that the kids hanging out on the boardwalk and beach were split into two groups, there were the frum kids trying to be cool and the modern kids also trying to be cool a third group called “frum girls who only glance at boys but don’t really talk to them”, these girls could be spotted mostly due to their quickened walk and longer sleeves, they also tend to wear more black and white and less yellow and red.

The off the derech boys could be spotted instantly, these were the kids with black pants and white shirts who had unbuttoned the top three buttons and rolled the sleeves up Abercrombie style, they also had a deep strut, what is it about frum kids who don’t want to be frum and strutting? The modern kids had all different types of clothing on, even shorts. We saw this one kid change from shorts into a black pants and white shirt when he got from the beach to the boardwalk, then he skateboarded home, it reminded me of this one time I met this Brooklyn yeshiva rebel at Coney Island and this girl with him was wearing a jeans skirt and a bikini top, talk about halfway off the derech.

I marveled at the scene unfolding, there was a ring of guys and girls on the beach, tzitzis and skirts fluttering in the wind and in the middle was a wrestling match, it kept going for some time and I thought back to the shabbos afternoons of my youth, they were completely different. My friends and I would walk into maariv in shorts and T-shirts with baseball hats, every kid in Manhattan grew up wearing a baseball hat whenever they weren’t in school, even on shabbos we wore baseball hats.

Fact is that even the modern orthodox people in the five towns are way frummer than folks on the upper west, we were a completely different type of community. Women wore shorts on shabbos just like the men and we all played ball at a place called Lincoln Towers, I myself would wander around central park and listen to all the different street performers and bands set up around the park. I even remember winding up at a Joan Jett concert as a teenager in summer stage.

We walked to the end of the boardwalk and turned around, it was kind of cool actually, living right near the beach, I dreamed of all the kayaking I would do when I came to visit my dad, my brother used to surf in Long Beach and like I did on Friday I could do the 21 mile round trip bike ride to the end of the spit and back – Far Rockaway was looking kind of good, well not that good.

Another thing that Far Rockaway has that we upper west siders never had growing up is the Saturday night hang out spot. There are many near the Rock, mostly in Cedarhurst, but none more fun and popular then the Dunkin Donuts on Rockaway turnpike which is teeming with teenaged and mid 20s girls and guys all Saturday night long, mostly because, like all frum communities there is nothing to do nearby besides eat.

I know many of you may be wondering why on earth I would spend a perfectly good Saturday night at Dunkin Donuts, and let me tell you how it went down. My dear friend Perel called me up with an offer I simply couldn’t refuse, she was bringing pizza and going to pick me up with 4 girls in the car and go to the beach – even if the girls were ugly – I really don’t get to hang with girls too often so I decided to hang out with my buddies in Crown Heights another night. Can someone really beat pizza and girls combined with a free ride and me having to do nothing but sit in the front seat and hold the pizza box.

Besides I always love going to Dunkin Donuts on Rockaway Turnpike to watch the scene but its just something you cant do by yourself. Funny because I can go into the woods for a week by myself and go to movies alone, but watching a frummie hangout – scene is much different. Mostly because I am like Rashi when it comes to people watching, I have a running commentary and I need to share it with someone.

There are so many different types of kids that come into Dunkin Donuts on a Saturday night I will try to list them.

The yeshivish guys who obviously aren’t so yeshivish because if they were they wouldn’t be coming to place where guys and girls hang out together on Saturday night.

The off the derech kids who come in looking for a table of girls with someone they know, who wait on line to the last possible moment and walk out without buying anything because they don’t want to sit down unless they could talk to someone.

The off the derech kids who never step foot in the parking lot and smoke up a storm while leaning into the windows of their friends cars who blast loud rap or metal for 30 seconds at a time.

The trying to rebellious girls who come in with just up the knees skirts and giggle when they see a guy who is in their brothers class, they never eat anything and only order drinks (which probably have more calories than anything else)

The hocker guys who stand on line with their arms crossed while doing the “hocker – I’m too cool for you – lean” don’t know what the lean is? When you see it you will know it.

The hot newlywed trophy wife couple with the three thousand dollar sheitle (what you couldn’t afford a nicer date?)

The older modern orthodox couples on a double date who always see their kids friends and talk to them and try and be cool.

I was commenting on all of the above groups when this group of two guys with full sefiras haomer beards walked on in. I immediately turned to the girls I was sitting with and said “These are the guys that come in and say Oh shit everyone here is 10 years younger then us” I then went up them and told them what I had said – I also told them I was in the same boat, although they probably thought I was 18 as well since no one ever thinks I am older.

My first shabbos in Dallas

← Mikvah Night Comedy
What was your worst restaurant experience? →

18 comments for “Far Rockaway and its sexual tension”