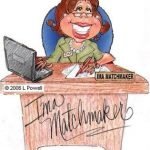 Disclaimer: Because disclaimers are fun! Please note that the below post is a mockery and may offend. If you do not wish to be offended or if you are easily offended or if you have a tendency to become offended on the behalf of others- please do not read on. If you are a shaddchan, or fancy yourself to be one, this piece just might be a good education for you, but you should still question yourself: What am I doing here, reading such shtuyot (follies)?

Back from the awe and glory that fills one’s heart in Israel, I met with the New York summer. Shortly after my arrival and recovering from the delirium of jetlag, I heard about an interesting, out of the norm lecture. I love out of the norm, so I dragged myself through the hot Brooklyn streets to hear said lecture. Black guys enjoyed the ventilation of shirtless going outdoors, while black hatters enjoyed the ventilation of recycled, cooled air as they studied indoors. Anyhow, the said lecture ended up being “in the norm”, but it led to an invitation to some kind of banquet that night. “Ok,” I thought. (I had time back then). So that evening I found myself at a large round table with many other girls- some familiar faces and strangers. Things were getting started when a woman came over to our table. She had a clipboard in hand, and started to explain what her game was.

Girls were excitedly filling out their names, addresses, phone numbers and ages on the sheets of paper held by the clipboard. I discovered then and there that the ultra frum facet is the most progressive leader in speed dating. The clip board shidduch system is unparalleled. It’s also a good way to marry off “no-name” girls and girls who are “over the hill”- you know who I’m talking about- the girls who are over age 22. No yichus, no money, no problem! The clip board system is so advanced it will match you up with a guy your height, your “level” and perhaps with the same hair colour as you! Wow. What better method could a girl wish for?

But, even after being thoroughly indoctrinated in the Holy Land to the idea of “taking action” to find your bashert, this was still a bit of a stretch for me.

I’d had my fair share of shidduch offers in various forms- generally laughable experiences. There were the old ladies in shul who couldn’t hear very well, (or see very well for that matter), who had tried to set me up with some stuttering guy. He certainly seemed an enthusiastic fellow in his search for a wife, as he boisterously greeted any female with the title “Rebbetzin!!!”. There was the crazy yenta in an Old City synagogue who stared at me for minutes and then came up to me with light in her eyes, “I have seen you before. I have a boy for you. He is tall just like you. He has eyes just like yours.” What did that mean, “I have seen you before”? Had stalking eligible males and females become acceptable in the face of the “shidduch crisis”? Finally I asked her, “Are sure that’s not my brother?” Her description sounded like my twin! She looked at me completely baffled and then went away to pursue other innocents for her “same eyes/ same height” boy.

I remember being told at 16 that due to my ability to clear out a clogged sink, I was ready for marriage. Really? I’d sooner expect to be recruited into some kind of plumber’s union with my drainage “skills”. To be honest, I’d sooner be ready to join that plumber’s union than get hitched at 16!

Another look at “the system”: I’m 18 and apparently there’s an expiration date written somewhere on me. Or did someone just stick a “shidduch me” sign on my back? 18 was really when the heat was turned up. My birthday was more a celebration of being “legit” for marriage. I just wanted to go to Israel and bury myself in books. But Shaddchanim suddenly appeared everywhere with other plans. You’d never know who could be one- suddenly a Rebbetzin you trusted since you were ten years old, would dawn that “I’m going to marry you off” gaze, like a superhero dawns a cape. Secret legions, whose soul purpose in life was for you to reach the same kind of marital bliss they had, would come out of the woodwork. From the lady behind the counter at the pizza store, to your friend’s little brother. Odd, yes, but it happened. Suddenly everybody knows somebody that’s perfect for you! Married women automatically get the honorary title of shaddchan. Romanticised commentary peppered with words like “binyan adeh ad”, “bashert”, and “a good bocher” were whispered into my ear at every opportunity.

One Shavuous night I was staying at a Rabbi’s house and the Rebbetzin began to bombard me with questions about what I was looking for. The climax to my evasive answers was reached when she asked, “Do you want some one black hat? Or do you want a motorcycle dude?” Ha! What a spectrum to choose from! But I am not so easily pleased. I want a black hatter who rides a motorcycle ok?

Well enough tangential nostalgia. I’d like to get back to the CSS (“clipboard shidduch system”) and further elaborate. The CSS was the kind of stunt that could only be pulled on the starry-eyed and optimistic BT’s of orthodoxy. And it hit its target spot on. I was the only girl who didn’t put my name and number down at that table. “You know, this really could be the way that you meet your bashert!”, I was prodded. That got me to thinking and wondering who really would be trolling through that list of names. I have a very active imagination and could just see some yeshiva guy with yellow teeth and beedy eyes going through that list, saying something like, “Chaya- ooh, I bet she’ll be an animal in bed”, and then snickering to himself.

In the end, each and every one of the girls who signed up for a shidduch, like you sign up for a summer program, are now married with kinderlach! Go figure.

To all the matchmakers: Truly you are a gift to our society. For those who take you seriously, the most important question to ask might be, “Are you interested in shidduchim at this time?” And ask but once, not 500 times. To those who don’t take you all that seriously, ask anything! We enjoy every awkward minute of questioning. And let me just say that it is ten times better to be grilled by some one who is a relative stranger and knows very little about you. Throw in a prize like, “he intends to be in kolel for life” and you just might hook your bait. A girl loves a “learning man” who knows how to turn those pages right. Well, my fantasy may not suit everyone, but seriously: Matchmaker, matchmaker make me a match, find me the kind that will fetch me a catch for my kids when it’s their turn to be interrogated for their future happiness!

5 people every shul must have

Funny thoughts about my conversion

How to find a wife

Apartment of the damned

← I know I’ve been slacking but I have excuses
How do you un-celebrate non-Jewish holidays? →