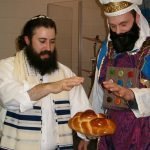 For the past two years I have attended modern orthodox sederim, but before that for several years I attended mostly yeshivish black hat sederim – and in doing so I have witnessed some very keen differences in the way these sederim are conducted.

The differences between modern orthodox and yeshivish sederim:

Time: Until I attended a non-hotel run modern orthodox seder I always thought they would be longer, I figured since shul was longer and everything the modern orthodox did in terms of simchas and holidays always ran longer, the sederim would be the same thing. This is simply not the case, mostly due to the fact that the only people who give divrei torah at most modern orthodox sederim are the kids home from yeshiva in Israel and the father. Rarely does anyone give over any long diatribe about the 400 extra plagues or do the kids say the ma nishtana in 3 or 4 languages.

Where as black hat sederim are all about the relentless barrage of divrei torah which usually have nothing to do with the story of leaving Egypt. In fact my dad one year went crazy because they didn’t even tell the story and rather they focused on what the Riff or Mar Zutra had to say about matzo cooking times or something. Also yeshivish people tend to take forever with ma nishtana, and unlike the modern folks they never help the kids out – ever notice how every modern person at the table says ma nishtana really low and slowly along with the kids. Yeshivish kids must say it in Yiddish, Hebrew and English. Even though your supposed to end before 12, I feel like bragging how late you ended is part of out-frumming your neighbor.

Kezayis: My first time attending a yeshivish seder as an adult was met with fascination due mostly to the size of the portions eaten of maror and matzo. Unlike my modern experience of filling a lettuce leaf with two tablespoons of charoses these people would dip 3 lettuce leaves and dump horseradish on top and then an argument about whether they ate enough would ensue. Then eating matzo would take forever, because no matter how much you ate, it was never enough.

Flip to the modern orthodox sederim I have attended and its all about pre-sized korech sandwiches passed around – half a leaf of lettuce, sprinkled horseradish and maybe 2 inches of matzo. For hamotzi you can eat whatever you like and its enough, no one ever calls you out or brings a whole Talmudic discussion on sizes and portions. Yeshivish people also dip their marror into charoses and never pour it on. I always used to be yelled at for pouring it on. I am all about eating the right amount, so that the seder wasn’t for a waste, if I have to go through with thing, it might as well be counted – hence the same reason I always wait an extra few minutes after fasts to eat.

Women: Besides for little girls saying ma nishtana, I never really saw women participation at yeshivish sederim, maybe my cousins were way frummy – but it never occurred to me until I started writing this post. I thought that women are supposed to be included because they left Egypt too – or is it untznius? Well its not like the women are doing all that much at modern sederim either besides talking to their men or making eyes at the single men.

Reading of the Haggadah: Yeshivish people do it in yeshivish Hebrew, very fast at times and the more frum you are the less likely they are to sing your pesach favorites like Dayanu and Avadim Hayuni. Modern orthodox people tend to sing all your favorites and take a darned long time doing it, because they always say it in English before they sing it, when I got to modern orthodox seder I expect to be carried along by the songs and spacing out during the rest of the stuff. Modern sederim always have a mix of languages, you have most of the folks that read it in English – then theres always that BT fresh from seminary that thinks Hebrew is better even though it takes her 20 minutes to read one of the four sons paragraph.

Modern people always use the same haggadah around the table, besides for one or two people usually sons that became frummer than their parents who are using different haggadahs. Common haggadahs at modern sederim include the Maxwell House (usually older folks) and the artscroll, also that yellow and red one – not sure what it is. At yeshivish sederim its completely different, mostly because loshon hakodesh is the language of choice, and therefore everyone has their own haggadah and usually some sort of sefer that they have lying around to look fort divrei torah.

Wine: At yeshivish sederim there is almost always red wine and if there is white wine, someone will start another Talmudic discourse on why you shouldn’t drink white wine – and then someone will argue with them about the whole concept of being free and liking white wine better and then someone will say “its not so pashut” and so on. At the modern sederim I have a attended there has been a plethora of choice, I always pick moscato or white joyvin, no I am not a wine person and I don’t feel like being drunk at a seder.

Other miscellaneous items: Modern people rarely bring pillows or lean correctly at sederim while yeshivish people get their lean on – I never remember to lean and most of the time I end up leaning forward so my wine doesn’t spill on my clothing – it always does anyway.

At yeshivish sederim there isn’t as much flirting as at modern sederim, or any at all, for me the seder can be a great time to meet women, it’s a shame they always bring their boyfriends or future husbands though, a singles seder would probably be real interesting.

Differences between modern and frummie weddings

Frum but with it vs. Modern machmir

Why do pesach seders suck so much (last years seder)

32 comments for “The differences between modern orthodox and yeshivish seders”