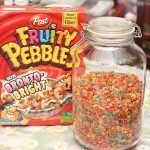 I found this article on the Forward about rebel modern orthodox ashkenazim in Israel who have begun to shun the age old restriction on Kitniyot and I want in, I have always thought Kitniyot to be a load of hagwash especially because its split amongst the Jews.

Would I go to hell for eating rice and beans? Wouldn’t we all be happier if we could partake in fruity pebbles instead of fruity ohs?

With the economy in the shitter you would think that the so called Gedolei Yisroel would be thinking of leniencies to allow certain minhagim to be broken so that we wouldn’t have to go broke when buying really crappy dark chocolate mints and those sugar fruit slices.

I know that getting the rabbonim to allow kitniyot is like getting beating a dead horse, especially because it makes people too happy and it allows people to save money by buying loads of other products they wouldn’t normally buy. But think of the achdus, sephardim have to practically quarantined during the passover season and this breaks in the Jewish togetherness of the holiday.

Can someone give me a good reason why we still uphold minhagim that should have been repealed years ago? Did you know that the Rabbis wanted to ban potatoes at some point but decided that it was such a staple that they couldn’t do it? Well I would think that good breakfast cereal is such a staple and I don’t want to subsist on fruity ohs any longer.

41 comments for “Rebel Ashkenazim begin to eat Kitniyot on pesach”