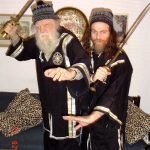 I myself have no idea where I fall into, I have no true hashkafa and I am a completely mixed up Jew. On the one hand I do my requisite 3 times a day davening, haven’t missed a day of tefillin in years, am koveah ittim (saying birchas hatorah every morning covers me) and I rock the yarmulke and tzitzis everywhere I go. Then again, I don’t own or watch any TV, rarely go to movies and try to spend as much time away from Jewish people as possible. What am I? I used to put modern orthodox machmir in my frumster pigeonhole every Jew spot but then I figured out that shomer mitzvot was a smaller category and would get me bigger hits. Then someone mentioned you may want to say modern orthodox liberal – which sounds like an oxymoron to me – well I am officially part of the shidduch labels crisis.

With the singles scene growing, its not just modern orthodox folks on the upper west side who are part of the singles community. It has expanded to the yeshivish black hat community – which is quite funny – because I can remember a time when people in the black hat community would look at the modern orthodox and scoff at the fact that they waited so long to get married and pointed blame at their coed institutions and focus on secular world. Look who’s laughing now biatch!

Actually no one is really laughing because the shidduch crisis has caused something of greater concern to each and every Jewish single, and that is a mini-identity crisis wreaking havoc upon the singles community. For the first time ever people are venturing out of their hashkafic realm to date, its a terrible thing according to some folks, especially the people who run frumster and Saw You At Sinai as they try to keep up with this identity crisis by consulting with the masters of judging and stereotyping Jews like myself. I have consulted with SYAS and Frumster to try and come up with more categories.

SYAS has with my help been able to add two new categories. Yeshivish Modern and Modern Orthodox Middle of the Road. It seems that modern orthodox machmir (modern ORTHODOX) and modern orthodox liberal (MODERN orthodox) just weren’t enough and they needed to squeeze another label in there. Yeshivish Modern has been part of Frumsters repertoire of categories for years and SYAS has got to keep up with the Joneses of internet shidduch dating.

What exactly is Modern Orthodox Middle of the Road you may ask and I shall try to explain to you what it is. For women this means that you are not sure about your hair covering as of yet, but you try to wear skirts much of the time, although around the house, and activities you like to wear pants. Many of these girls flipped out in seminary only to come back to reality when they stayed single for so long they started to contemplate tefillin dates.

For MO-middle of the road is not as much defined, you don’t really care if your wife covers her hair or wears skirts and pants. You probably daven every day but don’t make it to shul as often as your right wing MO brethren. You probably grew up more religious and after law school you realized the black hat community wasn’t for you. MO machmir tend to be from more left wing homes and are the products of the “Charedi teacher in modern orthodox schools because they pay on time phenomena.”  The men in this category are more likely to have pre-marital booty calls but sex is usually saved for marriage.

Yeshivish Modern has been debated for years, after all if you are yeshivish how could you be modern as well? Some have tried to explain this completely hypocritical category with humor, by saying these people believed in working with machinery and using electricity rather then merely having legislative arguments about oxen goring each other all day.

If you are from a yeshivish family you rarely pick the category of yeshivish modern, because you have been taught your whole life about the evils of modern orthodoxy – they can go to hell with their TV’s denim skirts and lampshade hats.

What do Yeshivish Modern and Modern Orthodox Middle of the road mean to you?

Judging people based on their living rooms and kitchens