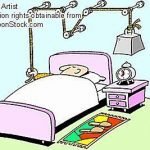 For the first time in my life, I slept in a house with a shul in Cleveland, and of course, due to lack of sleep the night before I slept until around 10:30, which was probably the point at which they were just sitting down to eat their cholent. Then the debate began.

Do I go on downstairs and pretend that I was meeting someone there? Do I hang my head in shame, proving to them that I was obviously not cut out to waking up on time? I decided it was too risky to go downstairs and davened in my room, after rolling over and sleeping for another hour or so.

Besides for sleeping late I think I missed shul for several underlying reasons, for me, shul isn’t the most exciting place and therefore more of a social thing. This shul was anything but social, meaning people actually davened there.

The lack of a women’s section definitely struck a cord with me, in a bad way, because I’ll admit that shuls with no women even if they are behind an Iron Curtain, are just lame. Even if I can’t see them, the mere thought of them there is quite exciting, especially when you have something to look forward to at the end of shul, of course some shuls usher them out of a separate entrance before you can even see em. The lack of a place to walk around definitely motivated me not to wake up, I need space to walk around after sitting for 30 minutes or longer.

Or maybe as my high school rebbeim used to say, it was all the plan of the yetzer harah who convinced me of these things and told me I was tired. I used to love these sorts of conversations that revolved around some unseen force convincing us that we were tired when we really weren’t.

← Are you a Josh Miller?
There’s one piece of chicken left – do you take it? →

11 comments for “Oversleeping in a house with a basement shul”