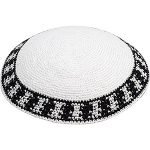 Josh Miller is a generic name that my friend came up with to describe the all American Modern Orthodox Kid who did everything right and is a model for what the mid 20 something modern orthodox male should be.

I have gotten several people onto the Josh Miller terminology, we would be sitting in shul and suddenly my friend would say, that dude is a Josh Miller and we would analyze everything from yarmulke to whether or not he interacted well with kids.

To be considered a Josh Miller you have to get certain things straight, first of all you must be thin, not in shape, because buff modern orthodox kids are named Josh Miller, but you should be thin, even lanky. Your face should not be square or long, you must have the round Jewish face with a relatively flay head so that you can wear your knitted yarmulke perfectly.

That’s right folks, Josh Millers do not wear suede or black velvet, they wear generic knit yarmulkes, usually with a pattern on the outside and a solid blue or white in the middle. The yarmulke must be fastened to the short hair with two clips or bobby pins. It is of utmost importance that the yarmulke be pushed down in the center so that the ends come up a bit and make it look like a Pringles potato chip. Josh Millers should also have slight bangs that curl at the forehead.

To be considered a Josh Miller you also should have gone to a good modern orthodox high school where they pronounced things like shaloshudos as suedat shlishit. Even if your family pronounced the Tuf as a Suf your davening sounds like a southerner speaking Hebrew in that perfect bar mitzvah boy voice. High schools such as Frisch, Hafter and anything with Hebrew Academy in the name are all producers of Josh Miller prototypes. All boys schools like Skokie and MTA are debatable.

Josh Millers have to come from upper middle class homes, they should have at least one parent that is a doctor, lawyer or financial person and their moms should work as well. They must attend yeshiva in Israel for no less then one year and they must come home more religious than their parents. After their year in Israel they must attend Yeshiva University or one of its branches including Brandies, Columbia, University of Maryland or Binghamton. Accounting, Jewish studies with a minor in History, pre-law or pre-med are most common. Majors in the arts, philosophy or languages means you are not a true Josh Miller.

Think you have what it takes to be a true Josh Miller?

19 comments for “Are you a Josh Miller?”