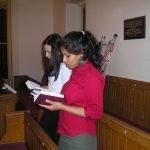 I was in shul this past shabbos when I witnessed the most amazing thing, someone standing about ten feet away took three giant steps back before starting shmona esray, it was mostly amazing because he almost ran over a little kid in the process who was almost trampled to death and who knows what other kind of damage could have been caused if other bystanders were in the way. Got me thinking about the whole three step routine which no one actually does.

Most of the time shuls lack the leg room for even one step back, benches are spaced close enough to each other to create that awkward side step motion which is needed to complete the three step back routine. Not once besides for this past shabbos in Dallas, have I seen someone take three full sized steps backwards.

In fact most of the time, if people even do the three step routine, they do baby steps or they do maybe 2 steps that they try and pull off as three. Forget about the end of shmona esray, how many times have I seen people just end and sit down.

What is with the three step routine anyway, is it halacha? Is it just some tradition to remind us that we are with the king (not referring to the rebbe or elvis) or is it just some random thing people do to signal they are done so that the chazzan can start up his thing again?

What shuckel position do you assume during shemona esrei?

Do girls actually do this???

How do you reject a girl after seeing her picture?

Judging BT’s based on their body maneuvers during shul

32 comments for “Who actually takes three steps back while davening shemona esrei?”