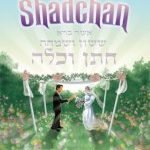 I recently hooked up two friends, its the first time I was successful in getting two people to actually go on a date. All of the other times there were excuses made. Usually something about one party being a GU (Geographically Undesirable) or not frum enough or they heard they wore a black velvet yarmulke and were therefore too frum, or countless other stupid reasons that cause me to scream multiple expletives into the phone.

But these people were different, the thought popped into my head and I just figured, what the hey. My friend asked me maybe 3 questions, including is she fat or skinny and where does she live and that was that. She asked some other random stuff like what kind of shoes does he wear, what is his yiddishkeit level and just like that they both agreed.

They did it the new school way of long winded Facebook chats and then a date at a bar. I didn’t hear from either of them until they went out a few more times, they were both really into each other and thats where I end my story. When the girl told me they were both into each other I think I shepped more nachas then a grandmother learning of an upcoming bris. I was smiling cheek to cheek and I was super pumped (no it wasn’t because of money- they are both dirt poor and probably would give me the finger if I asked for money) but it was such a gratifying feeling knowing that two people who’s paths might not have crossed, were involved with each other solely based on my doings, and that felt damned good.

But dealing with friends who I try to hook up with other people and their crazy issues makes me realize that being a shadchun is way harder than it looks and although many shadchunim are yentas, bitches and nosy judgmental beings – they mean well and most of them are regular old people just trying to do a mitzvah and make some bank.

Shadchans ask the most insane questions