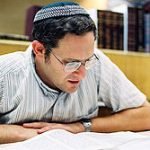 I was in shul tonight and noticed two kids who were davening like baalei teshuva only they weren’t, that’s when it dawned upon me that its Pesach time and many kids are home for Pesach break from their year in Israel – (why on earth they spend all that money to come home and go right back is beyond me but for another time) – and I can tell immediately who is home from their year in Israel and who is just home from college or yeshiva in America and you should also be able to pick these kids out of a crowd.

Davening: Kids home from their year in Israel all daven with that constipated look on their faces, their eyes are closed shut and they like to ball their hands into fists and shake them at the unseen Lord. They also love to shuckel really slowly and mid shuckel they always look up at the ceiling – but always with that clenched eyes constipated look. They also bow very slowly and very far down, in the same way BT’s do it but BT’s usually bow way too fast, whereas kids home from Israel bow way to slow.

Tzitzis: Ever see a kid with techeiles who isn’t hippy and just looks like plain old modern orthodox? Well I can guarantee you he just spent some time flipping out in Israel and doesn’t realize he just overpaid for a pair of tzitzis and wont be accepted as normal by any self respecting black hat wearer. Kids home from their year in Israel also tend to wear their tzitzis yeshivish style out on the side of their pants.

Devar Torah: Every guy fresh off the boat from yeshiva in Israel must tell divrei torah at the meal, this may be because he feels cool due to his widening of torah knowledge or he wants to make his parents happy that they just shelled out thousands of dollars for their son to debate whether or not an oxen goring another oxen is liable for damages. All divrei torah must be told without a sefer or else it looks to be like cheating.

Zemiros: I love when I’m sitting at a family that never sings any zemiros at the shabbos table and their freshly flipped out son tries to strike up some song. He sings his heart out but realizes that the spiritual level of chutz laaretz is too low and he starts to think of making aliyah – which he doesn’t do upon actually coming back for good.

Talking to girls: When they come back for Pesach a lot of guys try to refrain from talking to girls, but then in towards the end of the summer it wears off and they begin to talk to the fairer sex once again.

Other signs: Every time they talk or write something they have to use the words Baruch Hashem, Bli Neder or Bli Eyin Harah, usage of words like beautiful is also mandatory since they most probably spent one inspiring shabbos in Tzfat or Moshav Modiin. They also try to get little post lecha dodi carlebachian circles going on at their shul but this never works.

Any other signs that the kid your looking at is home from Israel for Pesach?

How about the girls – I would write about it, but its not my expertise.

How to spot an FFB or ex-yeshiva guy

How to spot an apikores

How to spot a gay yeshiva guy

How to spot a newly minted Baal Teshuva

How to tell when BT’s become regular old frum people

← When our brains play tricks on us
Do many people organize their lives around niddah schedules? →