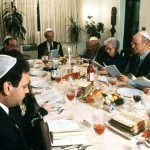 I know that Pesach is one of those holidays that many people just love to hate. The cleaning, the constipation and the long drawn out meal which consists of hours of telling the same old divrei torah and stories year after year. I myself feel the same way, and seriously if not for the Pesach seder footsie and hosts dressing up in costumes and crazy songs, I may be getting the Pesach seder blues like I have all the years until last.

With hopes for some more Pesach seder footsie and cool songs, I found this other item online called Elijahs Cup, for all of you frummies who don’t know who Elijah is, he is that guy that every Jewish ghost story is based on and the dude who is supposed to drink from the cup of wine placed in the middle of your seder table – (if the cup falls at a chabad house – you will see the chabad Hazmat team kick into gear to prevent any matzo crumbs from becoming leavened) Elijah is also known as Eliyahu.

Marc Jaffe who is a stand up comedian and writer for Mad Tv and Seinfeld came up with the idea for Elijah Drinks which is a silver kiddush cup that drinks itself. I guess its a good way to keep bored pesach seder blues people like myself happy. I bet you it works great on kids too, oh and I got one to bring to my seders as a gift.

Here’s a video of the cup.

15 comments for “Do you get the Pesach seder blues?”