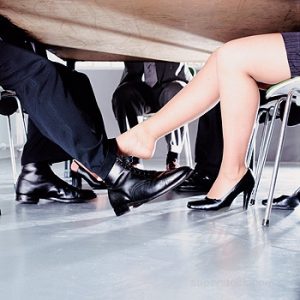 I should explain that I am a convert to Judaism for reasons of my own. I am not married, engaged, date, or in it for the men (only for the Man). I have recently been coming out to friends and family about my conversion and observances.

On occasion I do some side work for a friends law firm. It’s a very relaxed atmosphere because he’s my friend and the majority of the lawyers there are also friendly enough. I’m also a rather easy-going person and can talk about politics, sports, and rock-n-roll (a virtue that I highly value and think some frum girls I know could benefit from). Since I’ve recently integrated the stricter side of being shomer the following dawned on me. When a Jewish man finds out the shiksa he’s been eying converts to Judaism is it a turn-off or turn-on?

I always get assigned to one particular lawyer who is secretly orthodox. He’s not married, he doesn’t talk about girls , and he doesn’t wear his yarmulke. Though I once spied him wearing one while eating, a black velvet, no.6. I also once breeched the religion question and was met with a very rude stare and never brought up the subject again. Besides the religious stare down he’s really a great guy (tall too) and if I wasn’t a nice shomer negiah girl, I’d of tapped that real quick!! But we’ve never flirted with one another and I’ve never felt uncomfortable around him. So I thought he would be the last person I would be worrying about telling, so I thought.

Being that we were in a work environment I thought I’d invite my friend and the lawyer to lunch and casually bring up the subject. Well it casually came up and I swear the poor man’s eyes blazed over red. It was like G*D took his shiksa, boiled her and stamped her parve. He didn’t say a word outside of business for the rest of the day. I felt so guilty when I realized that he too might be shomer and that I might be part of his daily opportunity to get close to a girl, a dirty girl none the less. With that I thought it was over, until my friend called me into work.

With the door and glass enclosed conference room’s blinds open I could feel the tension emanating from within as I got closer. I sat down and started taking dictation when he broke out, are you kosher? Shabbos observant? Orthodox? After answering his questions he didn’t say anything and we went back to work. Then it began. Sitting across from one another I felt his foot knock into mine. Okay, accident. As I’m walking into a meeting among the boys, he’s adjusting himself “man-style” in his seat. You know, the casual spreading of the legs and sinking further back in the chair. Hmmm? I’m filing and he by chance needs the box on top of the cabinet. Reaching over me so nonchalant like, ever so close but enough for me to feel the vibe. Am I being marked? “What’s for lunch?” I’ve just been tagged.

I am so confused by this. I was never an “easy-girl” but I cannot say I’m not a women of the world in the Biblical sense. I know what’s going on and I’m loving it! It’s morphed into a master/mistress, no-touch, no-eye contact, volatile sexual tension, with great conversation, and it’s hot. Who would have thought? Tell me, is this trait of male dominance inherent in all Jewish men? Should I give into this?

P.S. I AM NOT “frum submissive” from craigslist.