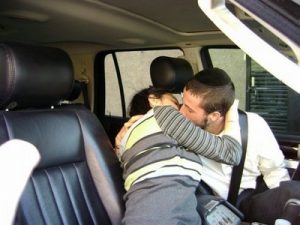 Tefillin dates take place when an orthodox guy goes on a date expecting to sleep over and therefore he brings his tefillin, hence the name tefillin date, and I think this is a good thing. I know I will get some flack fo my controversial views but after stating my point of view to several friends they were able to see the good in tefillin dates.

I don’t mean by the title of the post that tefillin dates are fun, which I am sure they are, I am actually trying to prove that tefillin dates are good because the guy is still thinking of God, even when their immediate thoughts are of sex. Tefillin dates are almost a living poof of the right wing movement of orthodoxy, because when I was in high school this would never have been thought of. You go out, sleep over and don’t daven in the morning. But now people can compartmentalize enough to put sins into one category and mitzvahs into another.

Based on my chassidus learnings the yetzer harah tries to get you to sin and tries to get you down on your sinning to the point that you are similar to people who give up on diets because they broke it once. To me tefillin dates are the same thing, you know you are going to commit a sin, but you also know you are not going to miss davening with tefillin.

Am I completely off my rocker or are tefillin dates a good thing?

145 comments for “Tefillin dates are good”