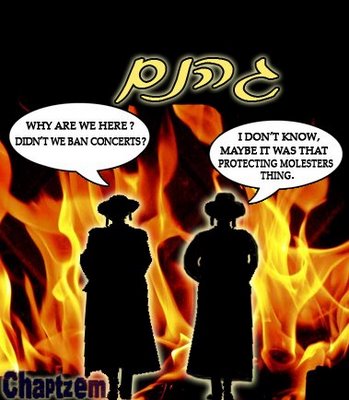 The Rabbis love to make bans, it proves they are keeping frummies insular, it looks good on their resumes and it helps them retain their tyrannical control over the ultra orthodox community. It is high time for the rabbis to ban some items that would be beneficial to us all, instead of focusing their attention on tznius, bug infestations and secular inspired Yiddish music, they should start banning other things such as:

Pre-pubescent boys choirs: it seems like an invitation to have homo-erotic fantasies and promotes child abuse. What is to stop boys choir members from getting busy in the dressing rooms? Besides we can all pretty much agree that frummie boys choirs suck and probably break every law in the book when it comes to kol isha.

Snoods: Do I even have to explain myself on this one, yes they look awfully comfortable, but a women in a snood and shabbos robe shouldn’t even wonder why their husbands are looking on the craigslist casual sex ads for more attention.

Bluetooths in restaurants: I just don’t want to hear what you have planned for mikvah night while I am sitting in a pizza store. Its rude enough that Jews don’t clean up after themselves in NY, add the Bluetooth permanently implanted in the ear and things go awry.

Pizza price gouging: How is it that every single pizza store in New York could find out when the prices go up? There must be some sort of Sephardic pizza racket similar to the way OPEC messes with oil prices, because there is no way that the Crown Heights people would know that Borough Park raised the prices to $2.50 a slice.

Women in SUV’s: In my view and I am sure I will get flack for this, women do not belong in SUV’s, simply because they drive erratically and the suspension isn’t made for quick yenta u-turns so they could say hi to someone they knew in the middle of the street. They should only be driving minivans, because SUV’s are probably not tznius anyway.

There are plenty more – but I needed to entertain you with a scheduled post while I was driving back to Texas!

← What is a Chillul Hashem?
Tefillin dates are good →