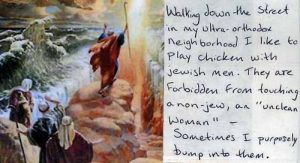 Everyone has a moment when they are not sure what the other persons views on touching of the opposite sex are, and these are what I would call “awkward not sure if your shomer moments.” The most famous one of these is the ever present handshake introduction, but there are many more.

Handshakes: I think the most argued about item amongst those that are or are not shomer negiah is the handshake. The introductory handshake is as old as time itself, and I am sure people were debating if it were halachically legal for centuries. The awkward not sure if your shomer handshake comes in many varieties. First there is the complete ignoring of the hand, the other party just stands there and tries to ignore the hand extended mid air, and waiting for your delayed or just not coming hand to meet midair. Usually the other party gets flustered and tries to do a 10 second explanation of how handshakes with the opposite sex lead to sex, which they never do, but still a Talmudic dissertation is always needed to explain weird Jewish practices.

Then you have those who are more confident, those who just come out and say that the only women they touch are their wives, seems kind of rude to me, but it seems to work much of the time. You have those that try to go as long as possible without handshaking, hoping that no hands get thrown their way and when they do, they give a yeshivish dead fish style handshake with no grip whatsoever in order that they should not receive any pleasure from the handshake. Is this because handshakes with the opposite sex are like chametz in that as long as you receive no pleasure from it, it is fine. What if one party says “it’s a pleasure to meet you”? Is that counted as pleasure?

Of course there are those that have shunned age old philosophy and paskined for themselves based on their armchair gadolisms that its ok for business or non-sexual nature to shake hands. These are usually the same people who do not wear yarmulkes to work and that play golf and can tell the difference between bourbon and whiskey.

Item Passing: I find myself trying not to touch the opposite sexes hands when they pass me an item, kind of like needa, but not – purely because if I were OCD about needa I wouldn’t pass items to anyone assuming they are all in a perpetual state of needa. I wonder if women realize I am doing this, its not really because I am super strict on shomer negiah, its more like the philosophy of “if I am going to touch someone I might as well save it for the good stuff” and so I would rather be strict and save up my shomer negiah brownie points, sounds dumb I know. I do think it a bit awkward when you do pass someone you someone and your hands brush, but I myself am that sensitive to touch from someone you are not allowed to.

Couches: I could always tell when a couple was not in a shomer negiah relationship by how they sit on a couch, if they are just too comfortable and don’t mind when they are sliding into each other like most couches do, it would usually set off red flags in my head. But couches in general are that gray zone when it comes to awkward negiah moments. Sometimes a girl wont even sit on the same couch as a guy, I have sat down and had girls put a pillow to protect themselves in the same vain that little old ladies protect their bananas from touching your apples on the checkout line.

Back taps for attention: I find myself tapping women on the shoulder who are keeping a strict regimen of no touching. A lot of times, I myself am not thinking of negiah at the time and merely thinking of mowing these people down to get past them to the cholent, but back tapping seems like the best way to get someone’s attention. I can not count the times that I have seen someone casually tapped on the back to see them spin around and confront the person like they were about to rob them or something.

Movie Theaters: I get this from friends of mine on both sides of the fence when it comes to negiah. “Dude we were at the movie theater and I swear to God she was letting her elbow touch mine” and hence the awkward moment of trying the entire movie to figure out whether the so called shomer negiah person next to you is trying to get you to make a move. This is also done in situations when a bunch of people go to a movie together and no one keep negiah but no one can figure out if the person next to them wants you to put their arm around them – remember when putting your arm around someone was a big deal? Like in high school, it would have been like getting some, actually if I could even talk to a girl in high school it would have been like getting some.

Shidduch Dates: The very concept of a shidduch date denotes some sort of unwritten rule of shomer negiah, but with a society of older singles and the proliferation of the shidduch crisis, the traditional shidduch date is out the window, tefillin dates evolved out of shidduch dates, although I feel like carrying around your tefillin is a bit awkward on a date, and where do you put your toiletries and change of underwear?

The awkward shomer negiah moments I am talking about on shidduch dates revolve around accidental touching. My buddy went out with a girl for 6 months and was shomer, one time during the whole period they touched and he said it was like fireworks, and it was one of those by accident hand brushings in the car or something – does show you the power of keeping negiah though. I was on a date once and I wasn’t paying attention and the girl grabbed hold of yours truly to get me back on the road – I was heading right for the BQE wall, she was awfully embarrassed being a nice bais yaakov girl and all – but I of course made a comment that I drove a stick so crazed shidduch dates couldn’t jump me while I was driving.

Sometimes you are walking on a date and you brush or bump each other by accident, or a little accidental footsie at the pizza store, or maybe a tight spot to sit down at the coffee shop forces you two within the touching zone? All of these events are awkward “are you shomer negiah moments” and believe me I and all of my friends notice each and every one of them, although I always wonder if the girl notices.

Anyone have any moments to add to the list?

Other posts on shomer negiah:

What type of shomer negiah do you keep?

← Rabbis in Brooklyn finally make a good ban
What is a Chillul Hashem? →