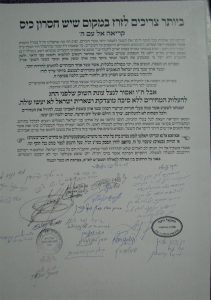 Vos Iz Neias is reporting that 30 leading Rabbis in Brooklyn have signed a religious ban on price gouging for Pesach items. Sounds like socialism to me, but I won’t point any fingers because I like it, well really it makes no difference to me – because all I eat on pesach is fruit and chocolate and sometimes some sardines.

But for once it seems that the Rabbis have banned something which makes everyone happy, besides for the bourguoise, it seems like the masses will finally welcome this ban. I was surprised that they haven’t banned machine made matzo yet because its so goyishe, but don’t get me started on ridiculous bans. For now I will relish in this moment of victory for the poor folks who can’t afford kosher for pesach products made by religious companies and buy regular old OU-P products which are probably considered treife by many.

Oh wait theres more…. the following was taken from the article on Vos Iz Neias

Unlike many rabbinical decrees where rabbis’ names are added without their perusal or consent, this kol koreh was read and signed personally by each rabbi listed. Following is the list of rabbis who have affixed their name to the ban:

WTF?!?! Does this mean that its exactly like the congressional earmarks and pork barrel legislation that gets thrown in by high paying lobbyists. How are we to trust these so called Rabbis is they are just signing onto anything that gets thrown into their lap by a high paying doner or someone who claims to be pious.

I found the news to be great until I read that, that just scared me into one of my conspiracy laden moments of the unspoken about tyrannical motives of these “kol korehs” signed by people who have no idea what they are signing.

16 comments for “Rabbis in Brooklyn finally make a good ban”