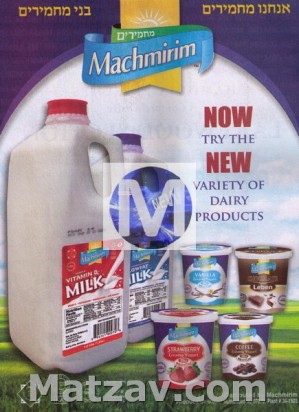 With a name like Machmirim I can only guess that the goal of this milk company is to further the gap between those who are frum and those who are frummer than you. Shuls and Yeshivos requiring that their members families only use products with multiple kosher certifications are popping up everywhere to try and insulate their communities against the treife foods that organizations like the OU and OK certify.

Rumors of Oreo Cookie and Fruit Rollup burnings have been awash in the kasharus industry, on grounds that these are not kosher enough due to their one hechsher packaging.

“We are so excited that Machmirim has taken a much needed step to protect us from the goyim and people less frum then us” said Rivky I’m frummer than you Horrowitz of Borough Park and summer resident of Lakewood, when we spoke to her as she piled he 15 kids into the back seat of her falling apart chevy caprice wagon with the fake wood paneling. She also mentioned that the days are over when products have just 3 hechsherim allowing products with such goyishe marketing lines like “Enlarged to show texture.”

Others were disturbed by the move, due simply to the lack of money in frum households. “How will we be able to keep up with the Rabinowitzes?” quipped one man who wished to remain anonymous for fear of cherem. “First they make glatt into halacha even though its a chumra, then they expect us to pay crazy tuition prices and now they expect us to cover the cost of extra unneeded hashagachos.” When will the madness end indeed?

Rabbonim cheered the event which marked a significant increase in many of their salaries simply because other companies want to break the world record and at the same time be as frum as Machmirim Milk. How anyone can be as frum as someone with a name like Machmirim is beyond me, but such names like “Your meat is chazer because it has only 3 hechserim” were deemed to be a little harsh.

As much as I wish I were joking – Machmirim is a real milk company that has 4 hechsherim – Matzav has the story – heres an excerpt:

Machmirim is located in Rutherford, NJ, and is expected to pump new life into the cholov Yisroel dairy, launching many new products and significantly upgrading the quality of existing products.”

Hat tip to Chaim Rubin for alerting me to this craziness

This subway is frummer then all the others

How frum is your car