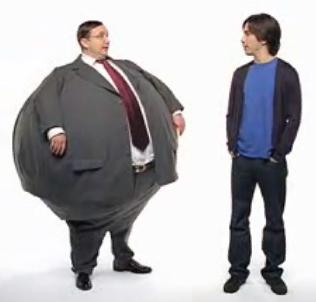 Apparently laptops aren’t supposed to last as long as mine did, due to an ever improving technological environment, normal people buy a new computer every other year. People like me are not conducive to the business model started by the American car companies called built in obsolescence, in fact people like me are detrimental to the entire economic structure because we, like people from the previous generation expect things to last. My laptop was bought in the fall of 2004, making it in computer years as old as the dead sea scrolls according to many computer philosophers.

I began to realize a needed a new computer when my roommate thought I was fooling around when I said my computer had neither an internal microphone nor a webcam. Then one day I was typing a long diatribe about who knows what and I looked up from a long thought out picking and choosing the keys session only to find my sentence traveling at the speed of a snail along the screen, it was like a sonic boom had taken place and the words were only starting to form on the screen a full ten seconds after a I finished the entire paragraph.

Then came Facebook, I tried loading my friend list and all hell broke loose, it wasn’t one of those regular computer freezes where you can push control + alt + delete like in the days of AOL chat. It was one of those freezes that made me feel like my computer was waking up from being frozen in time. It finally woke up, but I haven’t tried looking at my friends list or anything to do with large lists on facebook for the last few months fearing complete breakdown.

After quashing the idea of getting a netbook recently, I decided I want to get a Macbook and then all hell broke loose again. Deciding to go to the other side of the computer world by buying a Mac is an extreme decision that only people like me can get such a kick out of. Mac fans are militant, mostly because they are by nature different, they are generally smarter, more nerdy and think they are the shit. They also have no qualms in telling you why you are an idiot for even considering a PC, its like choosing between a Ford and a Ferrari as far as they are concerned.

I had never realized this, I always knew that people who used Macs were different, but this was purely based on my external judgments, they tended to dress cooler and know how to order the most complex drinks at Starbucks, I also knew that hipsters and the gay crowd liked Macs, and that I have sat in more then one independent coffee shop and watched as people gave me the stare as if to say “look around buddy, PC’s are not allowed” making me feel out of place as I looked around at all the tight pants wearing people drinking foaming soy lattes with their Macs perched on their cross legs making me feel like I should leave with my plain old chai latte and my Toshiba (spit with disgust).

If not for the fact that I am poor and once again debating what to do with my life, I would be at the Mac store and throwing down my grand for a basic Macbook, the problem is that I am too poor to even pay for rent and cannot reconcile the fact that Macs are so damned expensive and it seems like you don’t get much for your money.

I can get a basic HP on sale with 250 gigs of hard drive space and 2 gigs of ram for under 400 bucks, or get the Acer netbook I decided against due to my computer being used as a writing tool and netbooks having way to small keyboards. Acer netbooks are 300 bucks and super compact, but how am I going to type on it? While the Macbook costs a grand and all get is 120 gig hard drive and 1 gig of ram, seems kind of paltry in comparison don’t you think?

If you tell this to a Mac person like I did today at the tale end of a shabbos meal they look at you like you fell off the moon. They can keep espousing “you will never get a virus” over and over again, but the fact is, I never got a virus, well except that one time my brother got one for me. In fact I was thinking about how telling a Mac person that you are thinking of switching your computer orientation is similar to telling a Mormon that you are thinking of converting. People who use Macs are very religious when it comes to espousing their wares.

Fact is I need a new computer, and all but one person has said, wait until Vista goes away and buy a PC with windows 7, but I am seriously contemplating the Macbook and a quick search through craigslist revealed to me that people love their Macs by the lack of them for sale and that old Macs have a very high resale value. This did two things for me, it means that if I hate my Mac which apparently I wont under any circumstance, I can sell it, and it means that Macs last forever, because you cannot even find old ones for sale online, while PC’s are like American cars, people want to sell then and get a new one every couple of years.

If anyone wants to sell me a Mac for cheap or donate to the “Buy Heshy a Mac so he can keep blogging every day fund” please send me an email or donate $1000 to my paypal account.

← Are you anti drinking on purim?
The Best Purim Costume Ever →