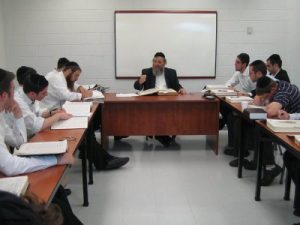 It wasn’t actually called the dumb shiur, it was called Rucks shiur, but it might as well have been. Not that I wasn’t proud of my status as an “am haaretz” which I never really knew until my friend Yoel called me one about 2 months ago. I always lumped ameratzim into the same group as apikorsim and kofrim, probably because they all sounded evil and I really didn’t think of myself as evil, I was just not cut out to argue about oxen goring each other, I would have just fine reading the Hebrew Braveheart otherwise known as Prophets.

But as my other classmates realized, we were stuck in Rucks Shiur, which really wasn’t a bad place to be stuck. It was like we were put in cherem, separated from the regular classes by a long hallway of Rabbis offices that were always busy with kids on the verge of being thrown out, or asked to leave as any yeshiva reject loves to call it. Going to the bathroom was like wandering the desert and whenever you had to go it was a brief escape from the confines of the dumb shiur.

I may be being a little harsh on myself for calling it the dumb shiur, as none of us were actually dumb. Ameratzim for sure, but dumb, that may be taking it a little far. In that vein I recently found out that in real yeshivas they call it the Gimmel Shiur and this Gimmel Shiur can be put into many different sub categories depending on how your rebbe liked to classify the kids in his class.

Ruck, as our rebbe was so eloquently known, mostly because he was the token older single guy in yeshiva (who when finally got married was used as one of those – “if he can get married…” for other older singles) was a really funny, lanky dude who was over addicted to professional sports, it showed in his charts. Ruck was all about using charts with erasable markers to show us how the gemara played out. He was like a football coach when it came to gemara and while at the time I claim to have understood what he was talking about – I don’t think I learned anything in his class. The only gemara I retained from my 8 years learning are the sexual stories of which I have no idea where they are located. I am so lacking in my gemara  knowledge that I cannot be cool and rattle off random phrases from the gemara to describe random events – those people are always so cool.

Ruck probably would have made a great rebbe if he could be tried out on the regular guys, but having a bunch of ADD kids who couldn’t tell you the difference between Bava Kama and Baba Basra was really not conducive to him trying out his teaching skills. He also hated it when we acknowledged the fact that we were in a less than normal shiur. A friend of mine recently informed me that this is quite normal for Rebbes of Gimmel Shiurim, in fact many rebbeim refuse to acknowledge the inferiority of their students merely saying that their shiur is for overflow because there are too many bochrim that year. Some Gimmel shiur rebbes will even go as far as to say that their shiur is normal but everyone elses shiur is honors.

I do have the distinction, unlike other people in my shiur, to have been in the regular classes for secular studies – which probably explains why I never graduated high school, hmm…

← What did you do for Purim?
Do you give strategic mishloach manot? →

26 comments for “I was in the dumb shiur”