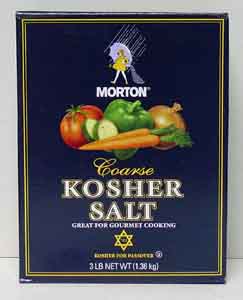 I never knew the salt market was that large, but I guess some Christian guy thought that Kosher Salt controlled too large a share, because he hopes that his Christian Salt is better than the kosher stuff. It got me thinking about the different types of Jewish Salt there could be, kind of like heimishe cholent vs. regular old modern orthodox, salt could also start being classified just like different Jews are.

Chassidishe Salt – our salt is only mined by chassidim, we are closed on shabbos and we only sell to people who wear streimels. Our salt is sometimes used to throw on women wearing red.

Yeshivishe Salt – yeshivish salt is mined only by yungerleit after third seder, this salt is never mined when during seder and there will be no bitul zman on this salts time.

Modern Orthodox Salt – This salt is only mined by people in white knitted yarmulkes who say hallel on yom haatzmaut.

Conservative Salt – This salt is mined by both men and women without a mechitza, we mine on shabbos with a microphone as well.

Reform Salt – This Salt is mined by anyone who “feels” Jewish, we don’t have no archaic applications that say your mother needs to be jewish.

Carlebachian Salt – Salt is so overrated and bitter, just smoke some weed.

Lubavitch – The Rebbe used our salt.