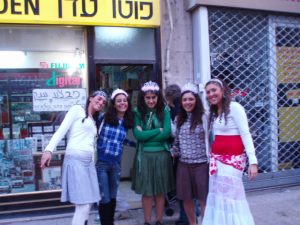 Once again I have to hand it to the Yeshiva World News coffee room for entertaining and enraging me at the same time. They do a great job at finding people who think that all the evils of this generation have some secret solution by blaming everything on women being untznius.

Is it tznius for women to wear purim costumes, is one of the latest threads to come onto the Yeshiva World News coffee room site – which is basically a really negative blog about all the wrongs of the secular community and how the frum community is da bomb and everyone else sucks. Of course, since it is placed on a “heimishe” site its perfectly ok to put down everyone who isn’t as frum as the commneters.

I have a feeling, or maybe its just my conspiracy brain talking, that there are some rabbis who do research on upcoming bans by figuring out the details of the ban or chumra by placing it on yeshiva world news to see what the masses think, and since the people who frequently comment on yeshiva world news are representative of the population who supports these bans it creates a good sample set, so they can then go through with the ban. Its like having a web user generated chumra site.

Is it tznius for women to wear purim costumes?

Do we even need to ask such a question?

Think about it, the fact that women are wearing purim costumes means they are having fun, which is most definitely assur. It also means that people will look at them, assur again. It also means that there may be colors worn other then black, navy or gray, and that is of course assur and very unztnius which leads men to sin – colors just make so hot. Also, why should a woman wear a costume if they can’t leave the kitchen?

← Ever have an awkward shalach manos experience?
Frum Escort Service →

66 comments for “Is it tznius for women to wear purim costumes?”