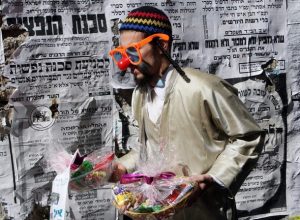 An Ultra Orthodox Israeli Jew walks in a street in Jerusalem in fancy dress to celebrate the festival of Purim parade on March 23, 2008. The Jewish feast of Purim commemorates the salvation of the Jews from the ancient Persians as described in the book of Esther and celebrations often involve much drinking of alcohol. AFP PHOTO/MEHDI FEDOUACH (Photo credit should read MEHDI FEDOUACH/AFP/Getty Images)

← Ever have an awkward shalach manos experience?