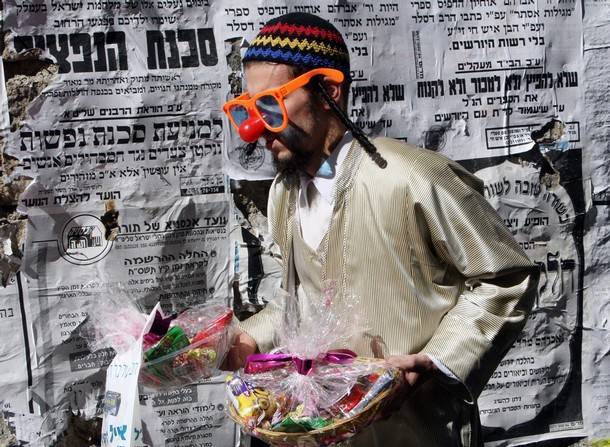 I can remember my dad cursing under his breath as he wondered how best to react to a surprise shalach manos basket, this was in the days before we would prepare and have “spare” shalach manos for those who gave us that we hadn’t made any for. Before those days it was awkward, someone would show up at our apartment and my dad would go into panic mode, basically telling the person standing there that we hadn’t anticipated their arrival and that we had to go into the recycle pile (the pile of candy neither me nor my brother wanted) and make a quick shalach manos, usually putting it in a bag that already had a little note attached that said something along the lines of Happy Purim from the Druck family or something which would be crossed out and say from the Fried family.

These memories are fond memories, because they were funny moments, the awkwardness of shalach manos is great and as a guy who likes to observe, there is no greater joy than watching people have an awkward moment.

I have wondered if there were certain unwritten rules of shalach manos giving. I have so many situations in my head I figured I would jot them down, because shalach manos etiquette is hilarious.

Lets say you made one of those fancy “baskets wrapped in tissue paper” with overpriced packages of nuts shalach manos just to “keep up with the Cohens” and you find that the people you wanted to give it to are not home, thereby ruining your plans of showing off. Do you leave and give it later, do you just leave it on their stoop hoping to get a call telling you how impressed they were, or do you just change the tag and give it to someone else whom you want to show your wealth and creativity to?

If someone gives you a shalach manos, do you always have to give them one in return? If you don’t plan on giving them a shalach manos in return, can I interview them afterwards and ask them their thoughts on that awkward situation.

If you’re like me you probably have a strategic shalach manos route worked out. The best thing to do is hit houses where you know they will give you a better basket then the one you gave them, thereby creating a trade deficit in your favor. You can be like the Chinese economy when it comes to Purim baskets. I also like to go to peoples houses that I know will have food lying around for me to rummage through.

I am a giver of basic shalach manos, my roommate and I would give each other beer and energy bars, or anything we hadn’t eaten in a while and knew the other liked. One year I decided to give people what I called ghetto shalach manos, which was a 40 oz bottle of malt liquor and some munchy foods.

Is it improper for me to give my ghetto gift basket knowing that I will receive something nice in return?

Is it possible for me to pick up chicks with shalach manos? I never tried it, but it seems like an interesting idea. Although you never know who is really underneath that clown costume. I used to think that Israeli  wafers were the coolest things in the world until I went to Israel, and found out other wise, I felt like a little kid being told Santa Clause was fake, I always thought the wafers were super pricey when they are the cheapest food products in all of Israel.

One of the most awkward moments of shalach manos has got to be when you gets something from someone that doesn’t adhere to your stringencies of kasharus. I can imagine the giver saying “so how’d you like the cake I gave you on Purim?” Oh, the cake right well the truth is, your not frum enough for me and I fed it to the dogs.

I personally felt awkward as a kid around my cousins in Monsey, they all had fancy gift bags and we were giving them our best shalach manos which still sucked. Seriously, my old man was not the most creative gift giver, a couple fancy chocolate bars which probably wound up in the “cholov stam” pile for the token modern orthodox people that showed up, maybe some nuts and then a bottle of booze. Then again those fancy gift baskets are usually all appealing with nothing good actually in them. You would be surprised what companies like Oh Nuts can do with a pile of nuts and dried fruits and the prices, jeez, if I had enough tissue paper and dried apricots I could send my kids to college.

I think the absolute worst part of the shalach manos ordeal was being forced to give gift baskets to people in my building who I spoke to twice a year. On succos because the succah was for the building, and on purim because you had to give people in your building something. It was always weird because you lived in the building yet never said hi.

I want to hear about your awkward shalach manos moments?

← Parshas Terumah devar torah
Is it tznius for women to wear purim costumes? →

15 comments for “Ever have an awkward shalach manos experience?”