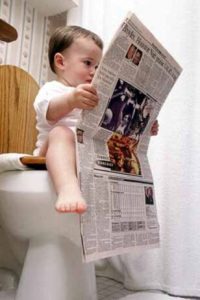 One of my favorite things about hanging out with people who have little kids is talking about poop and pee, I just love poop jokes and having little kids around justifies telling them constantly. Besides for poop and pee jokes you can really be immature and make breast milk jokes as well

So I was chilling with fellow blogger Jacob Da Jew and his wife when the concept of potty training came up. As an immature single childless man I can’t really relate, I figure kids just magically figure out that they need to pee in the toilet, especially boys.

Turns out their friend has a daughter hasn’t pooped in three days because she is scared, I wonder if they have a special Olympics for that. We also got to chatting about how boys have no clue how to aim. His wife has a buddy that taught her son to aim by putting a cheerio in the toilet for him to hit to the target.

Seems that little boys aren’t the only one’s that don’t know how to aim, seems that every single rest stop, gas station or public toilet I have ever been in has pee on the seat. I almost feel as if people pee on the seat purposefully to relive their childhood. Of course, how poo winds on the seat I will never know.

Now I will relate a story, I was one time staying at a buddies house and I woke up in the middle of the night for a pee, the lights were off and it was shabbos – they hadn’t left a night light so I couldn’t see. Instead of sitting down, I decided that I could “feel” it out. The next morning I woke up to find the women of the house was going nuts because someone had pissed all over the bathroom, with not one drop making it to the toilet.

Since the cheerio idea was quite clever I am curious to know, how you trained your son to aim?

Why are men so fascinated with holes in the ground?

PETA says ice cream should be made of breast milk

← What does Yeshivish mean to you?
See Frum Satire live this Thursday night in Crown Heights →

41 comments for “How did you train your son to aim when peeing?”