How to Find a Wife

Disclaimer: PLEASE note that this is a COMEDIC piece, ladies and gents, don’t let that escape you. It is exaggerative with purpose! If you are HOLY or striving to be, do yourself a favour- DO NOT read further. Keep your mind pure. 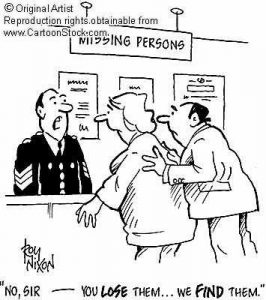 A question to ponder: How is it that an ultra-orthodox man can choose a prospective wife without looking at her or talking to her? He may have a grasp on her shoe size with those sideways and slightly stalker-esque glances he manages under his hat. But is that really enough? There are a few brave men that actually expose their eyes, and thus catch a headless snapshot of what could be their zivug. (Potentially this could be one of the best moments a Mr. spends with his wife, pre-marriage and pre-speech. Never-the-less, he will come to appreciate how a woman can nag a man both with and without the use of her tongue. She can nag you with her hands, she can nag you with her eyes, hell, she can even nag you with her feet if she wants to.)

Ok, ok, I’m sure there may be more advanced methods for deciding upon which bas yisroel will be cooking up babies for you. Stealing your sister’s year book and scoping out the graduating class could be practical. One of you out there is thinking, (as you flip through the pages), “That’s the one, and in a month I can start growing my beard!” Another, with mashiachist leanings is thinking, “Ha’shana ha’baa b’yerushalyim baby!” (If the implication in the last sentence is not readily understood, ask your Rav!) And yet another one of you is contemplating what to do with a woman. You know you want one, but you’re just not sure why. (Again, reference to your Rav would be of use.)

Obviously a modicum of guidance is needed through a bocher’s confusion, in order to decipher a frum female’s signals.

If a young lady slows down as you walk past her on the street, this is a good sign. If she suddenly speeds up, it is not an invitation to join her in a sprint. She is “running away”, or rather, swiftly fleeing (because that is more modest), from your probing eyes, that she knows are staring at her sexy ankles in opaque tights, from underneath your black Stetson or fedora or streimel. (And she is most likely disturbed by the dandruff flakes that show up all too clearly on the shoulders of your pressed suit. This turn off could be canceled out if you actually applied deodorant that day or ventured to take a shower.)

If your shul has a mechitza that has a space at the back with the “inconvenience” of being able to see the opposite sex on the other side, then there’s a whole new language you need to learn. Let’s say a girl is davening towards the back in this circumstance- she is definitely “looking”. There are signs gentlemen, to divine her level of interest. If she is holding her siddur in the usual stand-offish way- one hand across her waist, the other holding the siddur up, unreasonably high- then she’s only a tease. But if that siddur is below face level, and she is shukeling slightly, and appears to be in a deep gan eden of prayer, then sir, you may just be snatching a peak at a woman who’s willing to talk to you.

Late arrivals are sometimes intentional and not caused by sleeping in (chas v’shalom) or helping out with the younger children Shabbos morning, especially if the entrance to the shul can be seen by the men’s side. This move is called, “now you see me, now you don’t”. Everyone looks to the door to meet the late comer with critical or curious eyes. And then she disappears behind the mechitza………to be seen again, 30 minutes later, at the Kiddush. Hey, that’s as close to a “magic connection” as you’re going to get from this aidle maidle.

Shuls that have an upstairs and downstairs give women and girls quite an advantage. The married women can look down and monitor the spiritual progress of their husbands. The single girls can probe the crowd below (depending on preference) for pious fellows who seem engaged in prayer/ study/ vigorous Talmudic debate or they can secretly search for hotties. It can be hard to determine how good looking you really are, because the vantage point of the upstairs women’s section only provides a clear view of your head, shoulders and shoes. Believe it or not, a distinctive look may just catch some one’s eye up there. The grey suit is easily spotted. The small fedora hat is always a winning statement, especially if you’ve got some accent in it like a feather. A streimel with a feather doesn’t quite give the same message.

You see, to put it simply, a man wants to see what a woman looks like naked, but a woman wants to see how a man looks dressed. How are you clothed, and how do you fit into the environment of the community? Do you stand out? Do you fit in like checkers on a checkerboard? You have to impress her with your uniform gentlemen. And while for some ladies, the look of conformity is striking, for others, who harbour a clandestine love of the rebel, brown shoes could be your ticket.

Going by a gaggle of girls in the lobby of a hotel at a wedding can be a dangerous passage. Your back may be met with the sounds of giggles from the gaggle. Do not imagine that a joke was NOT made at your expense. It was. But be encouraged if, as you passed, you managed to glimpse more than the usual neck, shoulders and the ever enticing elbow with UBV (“under brim vision”, and actually caught a smile. The owner of that smile may be amongst friends and thus happy, but if she doesn’t turn away as you walk by in “stealth”, the smile was intended for you. She may be trying to attract your attention for G-d’s sake! And the laughter, though induced due to some mockery of you, may be, once again to draw your attentions. If you are astute, you may observe the exaggerated and prolonged manner of that laughter. That is indeed encouragement- of course only if you are interested!

Dancing at weddings is always a grand time. Depending on style, the mechitza may limit “interactions” between males and females. For women, a mass of blurred black and white on “the other side”, or hats occasionally tossed above mechitza level, is the general view. If any females are privileged to glance past the forbidden zone, they will see that only a handful of you are actually capable of some form of dance. The rest of you, in correct costume, could easily be mistaken for performing some native boogie more suitable to a National Geographic documentary than a frum wedding video.

At many weddings there are the dissident girls who go off and dance in their own small groups (breaking free of the traditionally prescribed circle) and whip out their reggae moves. They’re hoping that you’ll see something through the gauzy material or between the fake-plant mechitza. But frankly, unless you’re a gay choreographer with the eyes of a hawk, you probably won’t be able to see, let alone differentiate between the trained or highly untrained footwork that these non-conformists display in their so-called Yemenite dances. (I say, leave it to the Yemenites ladies or consult the gay choreographer for some better moves.) The best a girl can look forward to on the dance floor, if she is moving her hips in any way (even to hoist a baby up), are disapproving sneers from elder, married women. Having already worked their charms out of their systems, these women would probably prefer a brick-wall mechitza to separate you and your possible bashert. It’s a cruel cruel world.

Do not despair, for there is a happy ending to accurately reading the frum female’s signals, and it may just land your lucky bride on a table held by struggling girls in heels. They barely have the strength to lift her to the height of the mechitza. But they’ll get her up, triumphantly showing off your lady in white, as she clenches both hands to the sides of the table. She has that picture- perfect smile on her face, masking the fear she feels as the girls below do some kind of heave ho in an attempt to keep her afloat. Hopefully she won’t have one of those lacy umbrellas to hold in one hand- because that could seriously affect balance. There she is, the shidduch of your dreams, head bobbing up and down, up and down. It’s a sight to behold. Good luck bocherim!

Funny thoughts about my conversion to Judaism

Apartment of the damned

Am I still considered a goy?

8 people almost every shul has but shouldn’t

Asian Giyores writes about her experiences

← My first shabbos in Far Rockaway with my new family
Black Hats vs. Streimels vs. Spodeks →