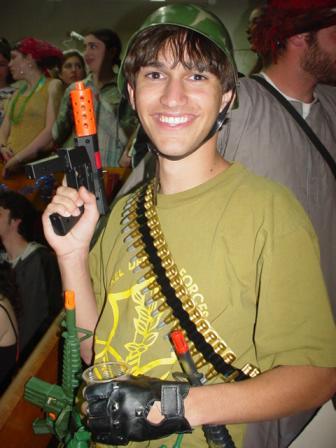 I don’t really dress up for purim, it just seems like to much work and then I can never find something good enough anyway. For the last couple of years I dressed up as a redneck, I am kind of redneck anyway so it wasn’t too hard. I basically put on my flannel jacket, a pair of jeans and slung my .30 caliber rifle it, over my shoulder – but this year I don’t have my stuff together and need to think of something, especially because during the meal I agreed to do a private show for some folks in Crown Heights.

I was thinking about all the classic purim outfits that people have, because lets face it Jewish folks don’t have the most imaginative minds and most folks just use the same purim costumes year and year out. This post is about those costumes, the ones that everyone has dressed up in throughout the years.

Soldier:
If you are a boy and are from a normal frum home, chances are you have spent at least three purims as a soldier. You probably had camo, or makeshift camo along with some sort of helmet and a toy gun that looked so fake that no matter how racist the cops going after someone were, they would never be able to say the guy had a gun. Old wild west revolvers with caps are also part of the outfit for poorer families that switch off between the cowboy and the soldier outfit.

Cowboy:
I may have even been forced to dress as a cowboy when I was a kid. All you have to do is borrow a hat, which is usually too big and covers your eyes, wear a bandana over your head and have a silver plated toy cap gun, and have fake duels with your buddies.

Monster:
Not much required, some face paint, a creepy looking mask that smells like the inside of a shofar (have you ever smelled the inside of a shofar? It smells so bad because everyone who blows it doesn’t brush their teeth on Rosh Hashanah) You also have to go around screaming, which is fine because there are always fights over candy owenership rights on purim.

Politician:
Bill Clinton masks were big when I was a kid, as were Nixon masks, mostly because those were two characters that had strange looking heads. I know that Obama masks will be big just based on his gargantuan ears.

Fireman and Policeman:
Every Jewish boy wants to be a policeman, but somewhere along the line they switch and become shomrim and hatzolah members – seems like you can run red lights and still become a nursing home administrator.

The Fonze:
Its not these people actually know who the Fonze is, but it seems that it is acceptable for folks to wear leather jackets and jeans on purim. Sunglasses are also popular.

Vashti:
I have never seen anyone dressed as Vashti, but Vashti pre-tale and pimples was probably one cool babe.

Other girls purim costumes:
It seems that my mind as well as my current hosts minds cannot think of any other girl costumes besides for several less popular ones. I guess like most things in Judaism, women are expected to be in the kitchen or on their knees (insert dirty joke here) cleaning up the piles of empty cups and puke left behind by unruly local yeshiva boys who were collecting.

Some other girl costumes include. The Ballerina, cowgirl, kallah, the “I’m wearing mommies sheitle costume”, the mom, the “I’m dressing as an adult with lipstick and makeup” costume, and the matching husband wife outfits that kids never wear, unless they are biblical kids who get married at age 3.

Rabbis:
The only time that frum women can realize their dreams of becoming a rabbi, is on purim. I think that those beards held on by rubber bands make women realize its not for them because they always tear your hair out.

Doctors:
Because every Jewish persons dream is to be a doctor – because boys want to cut stuff and girls like the idea of carrying a purse around.

Parents:
Moms wear wigs and Tattis wear hats, at least according to purim costumes which are the cheapest kind.

Clowns:
Jews love the clown outfit but its really cheesy

This is my outfit last year: 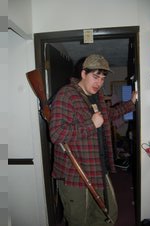 ← Judging shuls based on their reading material
Is the shidduch crisis like the energy crisis? →

91 comments for “What do you dress up as for Purim?”