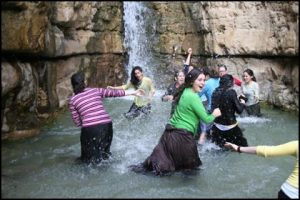 Its high time for changes in the frum community, crisis after crisis has effected us, and unfortunately until now no one has been able to admit we indeed have a serious problem with the way women act and present themselves. Lack of tznius standards and enforcements has never been an across the board agenda until now. Just like Hurricane Katrina and the earthquake in San Francisco were caused by the immorality of those places, the Jewish community has been hit with everything from child molestation scandals to the shidduch crisis due to the immodest ways of women in every frum community.

No longer will sheitles be allowed

No longer will we tolerate such disgusting things as heels

We have formed a committee that is responsible for administering the legislation proposed by the Chumra Research Institute, this committee will also be responsible for enforcing those laws and regulations through a special police force that will work with the local vaad hatznius to crack down on tznius offenders.

Apply to be a member of the Tznius Police:

In order to become a member of the Tznius Police you will go through a rigorous back round check that will include everything you have done since the time you could walk. Before you apply you should know that even the slightest infringement upon the laws of tznius will disqualify you from being a tznius police officer.

If there are pictures of you at your bris

If there are any naked baby pictures, especially of you in a bathtub with your sister (we may have to put you into the list of people who are posel aidus)

If you went to a coed nursery school

If your parents and parents – parents do not meet the criteria.

If your siblings do not meet the criteria

If you bought non-heimishe branded ketchup or similar products

For a women to become a research analyst with the tznius police you must:

If you ever wore pants as a baby

If you ever wore red as a baby

Separate lines at the grocery stores

Bike lanes are not tznius

48 comments for “Become a member of the Tznius Police”