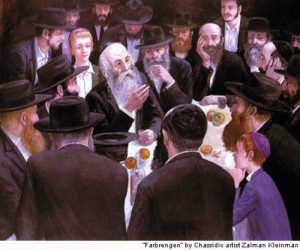 by Shaina received via email

One of the key attractions in the Chabad movement is the farbrengen. The emphasis is on inspiration. Welcome to a song-filled gathering of Chassidim that will satiate your heart and sway your mind. I was a rarity in the world of Chabad BTs, or so I like to imagine, in that it took me quite a long time to acclimate to the teary-eyed stimulation of the farbrengen. What I discovered about Lubavitch is that they are willing do anything to get you to a farbrengen.

There will be alcohol.
Not interested? Hard to believe. That’s what gets the boys to the party. But for females, le’chaims are limited and usually relegated entirely to the speaker or leader of the “farbry”- if this person is male of course. I must admit, it can be entertaining watching a “pious” man get drunk, singing an incoherent niggun into the night. He justifies that 15th shot of vodka by toasting, “L’chaim u’lebracha”. He’s blessed the moment; he’s made it holy and thus, even more inspirational.

If you are lucky, the “inspiring” Rabbi will be young and good looking- he’s married of course, but none-the-less, eye candy for a brand of girls that are meant to pretend to be looking ahead when they pass by any male over the age of 10. Ladies, don’t pretend like you’re listening so intently just because Rabbi So-in-so is talking about atzilus!

Ok, still not interested?
Well for girls with a good appetite, there will be food. At the least you’ll get a bowl of pretzels; at the best, you’ll get cookies, cakes, chips, soda etc. For those more conscientious about weight, there will be soda water…and maybe fruit- how many calories are in a grape?

Still not interested!?
Well, there are few strong willed souls that are not at this point….I was one such soul.

My “inspired” friends became tired of my renegade ways one night in Crown Heights, where a Rebbe’s image reigns as ultimate inspiration and may lead to events such as the following:
Five of us were walking up the street around 9pm, bundled in black. The usual pre-farbrengen conversation was brewing.

“To get some inspiration”

“Because we all need inspiration. Come. Come. There will be niggunim…” (Said in that sing-song voice that oddly instils guilt.)

This was my one weak-point. They knew exactly where to hit me. I’m a sucker for a good tune. But then I considered that there would be at least one girl there whose voice had become raspy due to cheering at day camps. She would inevitably be singing both out of tune, and at a volume acceptable only for the Celine Dions of the orthodox world (of which, let me tell you, there are very few).
This thought anchored my incredibly resilient stubborn quality- at which point, I refused to go. Apparently this kind of resistance had been encountered before, and was of little deterrence to my zealous friends. I found myself swept off my feet– and not by inspiration, but in the very literal sense. Two girls had my legs, two girls had my arms, and I was being carried down the street towards spiritual enlightenment… albeit by force. The sounds of niggunim were becoming more vibrant as we neared the farbrengen. My suspicions about an “aspiring” diva were confirmed as my perfect pitch ears cringed. Laughter was my only solution.

The one thing I learned that night was that there are many “heterim” when it comes to getting your friends to partake in a slice of farbrengal bliss. It is permissible to carry one’s friend through the streets to such a gathering as a farbrengen or kumzitz- as long as you drop her to the ground when someone passes by, and pretend like she just fell. If the passer-by happens to be of the male persuasion, he might just persuade himself to help up said girl. (There is now a possibility that you have participated in the mitzvah of creating a shidduch!) Unfortunately, I was not one of the lucky ones to be dropped at a bocher’s feet. And in the end, the speaker was not a good looking young Rabbi with budding beard, but an elderly woman… with budding beard. So the evening, all-in-all, was a bust.

Why Lubavitchers are the coolest chassids

The similarities between Elvis impersonators and chabadnicks

How to be a Lubavitcher video

← The most embarrassing moment of my life?
Southwest Airlines puts picture of Israeli swimsuit model on plane →