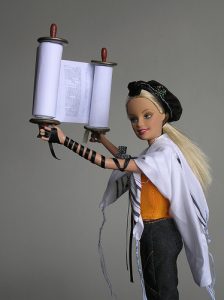 I was thinking just the other day about women in shul, well I am always thinking about women in shul, but this was different. First of all I wasn’t even in shul, I was driving somewhere in Oklahoma, and second of all I was thinking about it from a completely different perspective that I have never focused on before. The exact thought was something along the lines of “how come I never hear women clopping the bench in front of them to remind people in the women’s section to say morid hatal or insert yaale vayavo?”

A novel thought indeed, and then in the style that my brain thinks I started pondering a bunch of different similar scenarios of which I have no idea about because for all my time spent in women’s sections, both imaginary and real time, I never spent enough time during davening to actually get a clear picture of what goes in there.

From a man’s vantage point, the women’s section looks like lame and dull. Women stand and sway gently with their siddurs held up to their faces like anywhere else, probably blocking out the stares of the men who are bored. Why do women hold their siddurs up like that anyway, I have pondered that women and men hold their siddurs completely differently. Men hold them lower then women, and men tend to use their fingers as bookmarks while women do not.

But besides for their lack of siddur bookmarking, and their peaceful sways rather then shuckels, I do wonder if all is cheery on the other side of the mechitza. For instance, in shuls where the mechitza is merely a cinderblock wall with a small hole for only those in the front to see or hear what is going on, are there women who appoint themselves as the gabbai of the women’s section? How else are they to hear about random insertions and whether or not to say tachnun on that day? Are there many women who clop for shmona esray insertions?

I wonder if there exist women who daven and mumble loudly when they start certain prayers to make sure everyone around them hears. Men have loads of mumblers, usually to mumble things like hemelech hakadosh or show off how fast they made it to modiim. Do women even daven fast; I always pictured women as davening really slowly with loads of kavannah in some sing song type of way.

Maybe I should have just made this post into a query into the ways women daven. I am also curious if women clop their chests hardly for silach lanu or viduy, what if people with implants clop hardly enough? Do their breasts explode? What if your hand bounces off and hits you or another woman in the face? Clopping for women could be dangerous it seems.

I have written about the characters in shul many times, do women’s sections have their own characters? I know of the traditional old single ladies, the yenta and the self appointed official shul shadchun, but there must be those reappearing characters that we men aren’t privy to while we hock up at the bimah.

I do wonder if the service were led by women, what would be different. I sure as hell know kedusha would go on forever with the singing, but would things be all that different, oh and I am not talking about conservative or reform or feel good egalitarian flavor of the week Judaism. I am wondering what an orthodox prayer service led by women would look like, of course they would have the nebach single girl do gelila and the tall buff women with 13 kids do hagba. Who would be the bimah hockers? Would they correct mistakes in laining or would they take the reader aside for a therapeutic session/lesson on laining? Wait a second, has anyone ever witnessed a women correcting laining mistakes from behind the mechitza, I can imagine a whole write up about it in Yeshiva World News. “Women corrects man during laining, Rabonim thinking of banning women from shul.”

How much do you women like those one way mirror mechitzas? They have one here in Dallas at Ohr Torah and I am always wondering if the women are even davening or just picking out hunky guys to critique, you really can’t tell. Or is my imagination just running wild to the point that I think women are having pillow fights and tearing off each others sheitles and doilies in the women’s section when all they are doing is coming late, unloading the kiddies and then talking about the latest cookbook from Suzy Fishbein.

Why charedi women shave their heads

Women should just be banned already

84 comments for “What exactly are women doing behind the mechitza?”