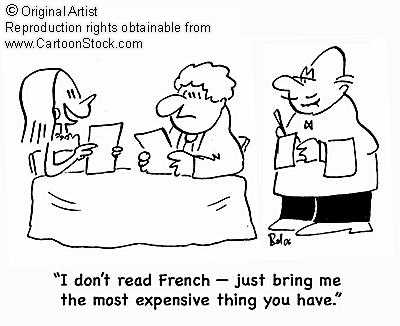 Anyone who knows me by now must realize that I am not a man of luxury, nor am I man of great wealth and so I do not go on expensive dates. I have been on several dates that cost over $100 but they were with girls I really cared for and have dated a while. Expensive first dates are uncalled for, and in my opinion there is no excuse. You could imagine my horror when I learned that my roommate went on a first date that cost him over $400, and the mussar I gave him for being such a dope.

I got all the details from my roommate, including permission to write about this.


He had never met this girl before, but already he was seeing stars after spending close to 6 months on the phone with her, already a bad idea in my opinion, getting too into each other on the phone creates all sorts of complications. For instance what if you spend hours on the phone before you even know what she looks like and after receiving a picture you are completely appalled by her looks? Can you just reject the person based on the picture alone? How do you tell someone that they remind you of pigs rolling around in mud and manure?

He had started talking to her in July and didn’t meet her until Chanukah time. They planed on having a nice evening date, he planned on picking her up in Brooklyn and then going to a nice steakhouse and seeing a show of some sort – already a pricey date and not something that I nor many people would do on a first date. My yeshivish friends rarely go on food dates prior to engagement at all – but that is mostly because they do not know how to eat with a knife and fork and have no idea how to use a napkin. In fact part of what they should teach in chosson classes is how to eat like a mentch.

She said over the phone that they should make a day out of it, and he readily agreed. He picked her up in the morning and went to get some bagels with her – she didn’t want to be seen dating so he had to get the bagels and bring them back to her, she ordered a tuna bagel, the most expensive item on the list. Then as if bagels were not enough they went to starbucks and she ordered one of those expensive drinks that no one bothers to check the hechsher on.

Then they walked up and down park avenue, but boredom set in and he wanted to please her with his endless bankroll that you receive from being a public school teacher and he took her to the top of the rock to take pictures. $20 each mind you and they weren’t even up to the main parts of the date. Already he had spent a total of $67 not including subway travel and time it took to ride the train from Washington Heights to Brooklyn.

Then after all that, my roommate was in love and lost his motor skills, since the date was reorganized he was not able to take her back to Brooklyn and go to a modest restaurant, with the help of her requests she was whisked off to Prime Grill where he proceeded to drop down $230 on the meal. Add this to the $67 already spent and the flight from Dallas and you have a week vacation in the Bahamas.

Then the date should have been over, a nice walk in the park to take off all the extra weight, maybe a walk across the bridge? Nope, there was more to come, two tickets to Cirque Du Soleil at Madison Square Garden, a price tag of $60 each. Going to see a show on a first date is similar to seeing a movie on a first date, its simply not done, it’s a way for the person to get away with not talking to you for several hours, brilliant on her part.

After the show they went to catch the subway, her metro card had run out so she used his unlimited without realizing that he couldn’t get on right after her. There was no metro card machine or teller with which to get on the train with her, so heartbroken he stood there and said goodbye through the plexiglass like a lover visiting her man in prison.

He ran upstairs to try and get a metrocard somewhere else and when he came back his spirits were raised as he saw she had left the station to say goodbye in style. They got their metro cards and then boarded the train back to Brooklyn. On the train she told him that she was not interested, citing the Romeo and Juliet line of being from different worlds.

I would have promptly called her out on taking all of my money, but my roommate is too nice to do that so he just sat there glumly. I don’t think he calculated all the phone time, travel time and $427 spent not including the subways and plain flights and time traveling in order to basically be told that he had just been conned by a gold digger. I would have demanded some money at this point, well I wouldn’t have, because no woman could get me to spend that kind of money on her unless we were married, or unless she agreed to go backpacking the Pacific Crest Trail with me in which case I would pay for her gear.

Maybe I am being too harsh, maybe she really didn’t realize until eating that $230 meal that they weren’t for each other. I don’t know, but my theories were proven correct when she called him back several weeks later and they agreed on another date, very dumb decision in my opinion, in which she requested to be taken to another fancy restaurant instead of just doing something normal.

← Another shabbos in Dallas
Do ever get the good shabbos nod? →

62 comments for “What is the most expensive date you ever went on?”