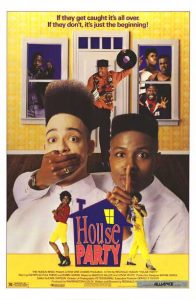 My hair is getting pretty lengthy as many of you can tell, and although I love long and shaggy hair, I have some gigs coming up that made me want to look more presentable – so I grudgingly decided to geta haircut tonight. Like any poor guy, shelling out 15 bucks for a haircut sucks and I decided to hit up this barber school near my house. My roommate said they have a sign advertising $5 haircuts, so I hopped on over thinking I was the man, that was of course until I walked in.

I guess I should have known that prepaying for my haircut through a bank-like window that was probably bulletproof was not a good sign. Nor was the fact that the place looked more like an x-rated movie theater from the front then a barbershop.

I casually walked in and immediately noticed I was the only white person there. There was gangsta rap on the sound system and everyone was black, I sat down and the next thing I know some girl with red and orange braids is saying something about me being Jewish. I felt like I was back in Monsey as the only guy without a hat in shul, except here no one was staring with half eaten sour sticks draping out of their mouths.

“Oh you is Jewish, I seen dat little hat on yo head”

I played along and told her about all these people thinking its sewed onto my head rather than clipped on. There was this bug burly guy getting his hair shaved off, as some guy said he could take care of me.

I sat down in a chair and was asked what I wanted, I said I wanted something basic, just a trim and to try and keep my sideburns (I explained peyos, but I think it was drowned out by the bass) I looked around as he said he would give me something contemporary as he asked about my hair gel and combing methods – I told him that I had never even seen a comb, kind of like a yeshiva guy learning that a knife was so you didn’t use your hands or a piece of matzo.

He took matters into his own hands and when I finally did look up I felt like I had woken up in an Depeche Mode video. I seriously looked like that dude from House Party, except I was white. This guy had shaved off the entire sides of my head and had left my mop as is. I silently chuckled to myself as I imagined how people in shul would react this shabbos and how good of a skit this would be the next time I had a gig.

The barber saw my horror and tried his smooth talking and said he was going to blend it or fade it in. I was full of terror at his words, I hope he didn’t mean to shave my head. He went to work and by the time he was done and I had chronically checked to make sure my peyos were still there, I looked up to find myself looking like Paul McCartney when the Beatles went for that mushroom look.

My first thought was that this was by far the most goyishe haircut I ever had. A weird thought considering that I wear jeans and listen to non-Jewish music, why, according to the yeshiva world news I am a goy. My peyos are barely visible and I could feel a chill even though it was 68 degrees when I left the barbershop.

Definitely an interesting experience, I always wanted to hang out in a black barbershop I would compare it to hanging out in Gottliebs Deli in Williamsburg or a similar type of place where people merely come in to see whats up.

I don’t recommend going if you want to look normal. My roommate says its not that bad but I don’t like it.

← Why old tefillin are better then new ones
Have you ever encountered a brick wall while on a shidduch date? →