Vos iz Neias and Yeshiva World News both had articles this week concerning a worldwide bug infestation in raisins, it was quite funny to read it because it sounded like some sort of terror alert. Immediately the comments went from oh my we are all going to hell for eating bugs to “first it was water then it was strawberries and now its raisins” – that is what I thought – another kasharus crisis looming on the horizon and a good excuse for people to poor more money into the controversial kosher racket which seems more and more like the mob every day.

First Yeshiva World News published a letter from the KAJ, then like a scene out of some far flung newspaper rivalry Vos Iz Neias published a statement from the OU that said they saw no problem with raisins and basically had no idea what KAJ was talking about. So of course the comments reflected the readership of that site and they basically said that OU wasn’t kosher enough and that KAJ was more kosher and all that modern orthodox vs. black hat rivalry coming out.

Read again what I just said – the KAJ finds a supposed bug infestation in a food that everyone in the frum community uses to make kugel with and they don’t want it being made public?

Here is the published letter: 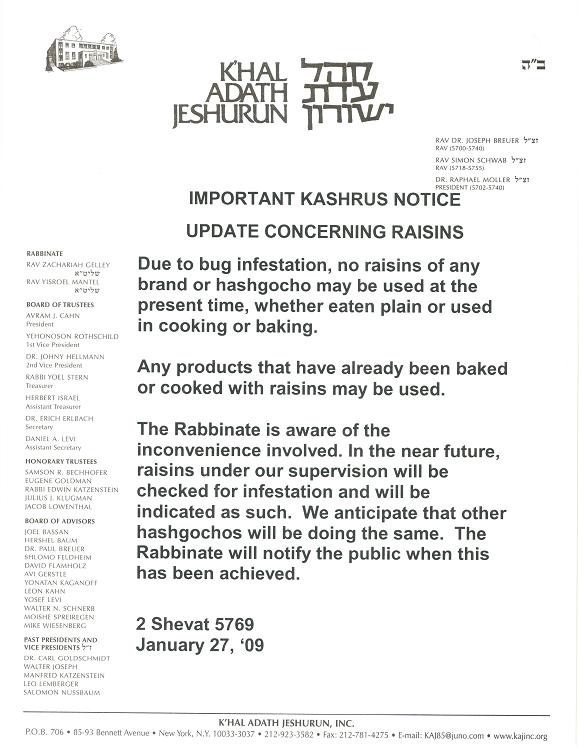 I also don’t understand why products cooked with bugs can be used?

Now is that a conspiracy or what? They claim it was for their shul members, can you imagine if the treife chicken scandal warning was just for shul members. How can a kasharus organization issue a warning just for shul members? This case is a little ridiculous and I hope Dov Bear or Wolfish Musings or Chaim Rubin who are into writing about  conspiracies within the frum community will try and figure this thing out.

To me it seems like a preemptive way to market pre-checked raisins which you can bet will be produced by some frum company in the near future.

This last statement is where the KAJ proves that they publicized this to get more clients.

I believe that in the future supervision on the production of raisins will -as a matter of course- include checking for infestation by many kashrus agencies. Given the recent publicity on the matter, it is likely that raisins will become standardized as an item checked for infestation in line with strawberries and vegetables which need checking, for instance.”