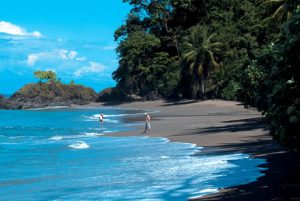 It was in completely spontaneous of me to run off to Costa Rica without telling anyone, but a buddy of mine calls me up and basically begs me to go with him – it really didn’t take that much begging, I said I would go if he paid for my ticket and I wouldn’t have to pay him back for 6 months or so, deal! So 2 days before embarking to Central America we got our tickets and arranged to meet in the airport, a very risky move.

Like all things done hastily, my friend soon realized his passport was expired, so I begged a road tripping buddy of mine from Detroit to book a flight and take a wek off of work at a days notice. There aren’t many people that could buy a plane ticket to an odd country at less then 24 hours notice – money isn’t the issue – its the pure insanity of doing that, I spoke of volcanoes and monkeys and half naked women on the white sand jungle filled beaches and he readily agreed.

My other friend than took my advice and visited one of these “heimishe” passport guru guys who charge you a couple hundred bucks for an expedited brand new passport (he got his the same day) makes you wonder about the efficiency of government institutions. So he told us we should meet him in the airport the next day – a bad idea without internet or cell phones. We waited several hours and after everyone from his flight left the baggage claim we left and headed out with our tiny 4×4 rental car to the Arenal Volcano which can be seen spewing lava at night.

Costa Rica is awesome, its got cloud forests, rain forests, jungle, volcanoes, tropical beaches and some really animals. It also has dirt cheap hotels called cabinas and absolutely no kosher food. We stayed as cheap as $5 a night and we thought we were kings when we stayed for shabbos at $26 a night.

The highlight of my trip was getting robbed, I know it doesn’t sound like much of a highlight, but monkeys, crocodiles and toocans (the fruit loops bird) were cool, surfing with the jungle as my back drop was awesome even though I got burnt to a crisp, staying in a nice hotel for 5 bucks a night brought out the true Jew in me. Watching the midnight sky be lit up with lava spitting out of a volcano was something and hiking through the jungle to waterfalls was simply amazing as well. Oh and meeting up with our lost friend in some random bar in the beach town of Montezuma was very hashgacha prutus – but being robbed simply takes the cake.

My buddy and I were off enjoying the beautiful brown skinned ladies of Monetzuma, a hippie surf town on the tip of the Guanacaste peninsula on the pacific side of Costa Rica, we had just bumped inot our lost friend in some random bar after we had had some drinks and we went back to our rental car to grab our gear to put in the hostel.

My friend Danny opened up the car and immediately let out some expletives, we both remained calm, the thieves who had broken in (not too hard in a cheap car without power locks) had been nice enough to relock the car doors when they were done taking all our stuff that was in any sort of bag. I started running through my inventory, shit my tefillin were gone was my first thought, then my cell phone, camera, very expensive back pack, camel back, favorite belt, wind proof fleece and oy my 1.8 pound sleeping back that was the size of a medium challah. Danny lost his camera and Ipod (full of local Detroit music which is not readily available), thank the Lord my 160 gb Ipod which was filled to capacity with music and mussar was in the car and out of the pack, my glasses, sneakers and extra pair of sandals were saved, as well 2 t-shirts and my headlamp were all outside the pack.

This was Thursday night, I was bummed, what if kept coming into my mind, but it was gone and there were no police (whom I didn’t trust anyway) in the town. Costa Rica doesn’t even have an army and the police already stopped me several times, including one almost speeding ticket which I begged my way out of. So we went to sleep and every few hours I would recall another item lost forever. However I was most bummed about my tefillin – for Jewish as well as sentimental reasons, would these people have any use for them? They were my bar mitzvah tefillin which was very sentimental, I can’t even afford to buy a new pair of tefillin, figured I could ask for donations – my paypal account is [email protected] if you want to donate so I can get a new pair of tefillin.

The roads of Costa Rica are truly insane and were half the fun of the trip. We rented a four wheel drive vehicle which was super fun to drive, good thing that all of us drove stick, the car was a dream, to drive just because of its high clearance and short wheel base, but the roads were still rough. Only 20% of the roads are paved in Costa Rica but the unpaved roads aren’t like the unpaved ones in America, In the US I barrel down dirt roads at 60 miles per hour, in Costa Rica everything takes 3 times as long as you’d expect from the distances.

The country is the size of Vermont and New Hampshire combined, twice the size of Israel, not very big. 20 miles can take an hour or more, even on paved roads which aren’t much better. You know what happens when half the road washes out, instead of filling it in or making a fence around it, they place a low curb around it which cant be seen at night. We drove roads with land slides on the road and simply drove over or around, it was quite harrowing.

My Spanish improved quite a bit, we had some drinks with a guy in a truck with Minnesota plates who told us about how crazy border crossing was in a Foreign truck, he was the classic hippie who moves south of the border, it was hilarious.

We were at a gas station outside of San Jose, the capital city and there was a women with a skirt and hat on with a guy in black pants and t-shirt and a baseball hat pumping gas, we heard hebrew and we pounced, they had driven from Panama where they were on shlichut and we had a chat.

We finally got to eat some real food at the glatt kosher Burger King in San Jose(I have no idea how they support it), I should mention that San Jose is a city of over a million people and there are no street signs , thats right in Costa Rica there are no street signs and besides for the main roads, no road numbers as well. Getting around is quite the experience. We ended up having to ditch our shabbos plans because of that reason and ended up at this Couple who works for Aish on the Monday night before our flights.

Besides for losing $1500 in stuff the trip was great, I have absolutely no photographs of the trip and in fact have nothing to film videos on anymore and am flat broke. I am dead serious about donations, I know some of my readers have some dough and the better mood I am in the easier it is to crank out posts on a regular basis.

I was actually going to name this post “I got robbed in Costa Rica and all I got was this post” but it wasn’t really true, I have some great memories and stories to tell.

← Top ten middle east facebook status updates
Are you Shomer but with it? →

35 comments for “I wasn’t burnt out, I was in Costa Rica”