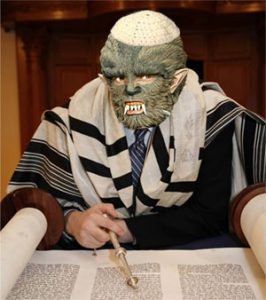 I have never caught a mistake during laining, this may be because I have never actually followed along. It seems like it must be a thrill to catch a mistake, have everyone look at you like you’re the man and make the guy laining know he’s not in charge and he has to answer to the mistake catchers. Does your shul have a lot of mistake catchers? Maybe there is only one, every shul has different policies when it comes to catching mistakes during laining.

Official mistake catcher:
I have noticed that the frummest shuls, the really frum ones, not the faker ones where everyone looks frum, tend to have one official guy who catches mistakes. This is so the guy laining is not embarrassed publicly, I like this policy the best, but at the same time I feel that some people only read along in laining to hit the jackpot and catch a good juicy mistake. At these really frum shuls however, you will notice people silently correcting the person with hand motions and back of the palm gestures that say NU without actually saying anything at all.

Not really an official mistake catcher:
Next down the list would be those shuls that have many people correcting the mistake but they do it in low voices, they kind mumble every few minutes while there is also one official guy and of course the folks up at the bima. Instead of hand gestures these people will correct mistakes, but they aren’t trying to slaughter the guy like in some shuls, artehr its more of mumbled frustration.

If they catch mistakes someone must be listening:
You have to admit that if people are catching mistakes they must be reading along, so next down the list would be those shuls in which many people are vocal about mistakes but they aren’t out to get the guy, like in many shuls.

We are here to embarrass you:
If you ever attend a shul full of hockers you will see that they make a mockery of the guy laining if he makes a mistake. Sometimes the guy at the bimah will get into linguistic debates about the pronunciation of certain words and a whole fight ensues. It usually goes like this, lainer makes a mistake and ten guys start yelling along with nu- whatsa matter with you but these shuls made me understand why some shuls have to pay for someone to lain for them.

What only one person caught that?
I have been in shuls where it was obvious from the fact that a big mistake was caught by one person that no one was reading along. This usually happens in small modern shuls and the guy who catches the mistake is the token frummy, like the Rabbis son who frummed out in Israel or something.

In high school we had this guy Kaiser who would lain every week and he was a super lainer, he was the type of guy who could lain in shul and be the only guy to catch his own mistakes. Kind of pathetic I know, but sometimes that’s how it is.

What you’re too shy?
I have been in countless shuls with these shy people that catch tons of mistakes but don’t have the ability to speak up, they mumble barely audible corrections, but just like half of my college classes no one can speak up.

Unofficial gabbi:
In some shuls there is one guy who appoints himself as the “rude know it all” – mistake catcher, he overrides the gabbi and just goes all out. Sometimes he stands in the front with all the bimah hockers and sometimes he is just some random guy in the audience.